Music, science and service connect couple to each other, Bethel 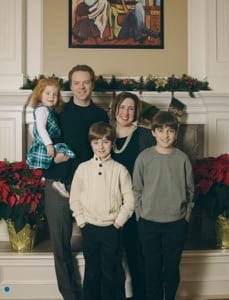 Neil and Elissa Hamill with their children, from left, Amelia, Miles and Owen

Elissa Berndt and Neil Hamill first met as Bethel freshmen. “Elissa and her roommate were busy trying to blow themselves up in chem lab and I happened to be next to her,” Neil says. “It may have been out of self-preservation that I offered to help them along.”

Elissa grew up in Lincoln, Nebraska, where she had Dianne Epp ’61 and the late Tony Epp ’63 as Sunday school teachers. They were “key in convincing her to go to Bethel,” says Neil, who is from Kansas City, Kansas.

“My main extracurriculars were sports—soccer in fall and track in spring,” he continues. “However, I also played the cello, which the orchestra happened to be short in that year, so I volunteered. Elissa and I agree that it was through science that we became acquainted, but through music that we really connected.

“Bethel allowed us to experience so much. I was able to participate in sports, Elissa showcased her musical talent in orchestra and quartets, we traveled—J-term in London, awesome!—all while receiving the highest quality education.”

Neil was accepted to medical school at the University of Kansas, completed a residency in obstetrics and gynecology, and continued his training at Wayne State University, Detroit, jointly with the National Institute of Health (NIH) Perinatology Research Branch. He is now a maternal fetal medicine specialist with the Methodist Health System in Omaha.

He says, “My Bethel science degree equipped me with the tools to be successful. To date, I’ve published six first-author papers in my field of ultrasound in pregnancy, won a world research prize [in 2008, from the International Society of Ultrasound in Obstetrics and Gynecology] and received faculty teaching awards. Every day, I get to care for pregnant families and teach the next generation of docs. It’s a great way to spend a career.”

Neil says that at Bethel he and Elissa were “instilled with a dedication to service.” They are active in their church, work with local ministries in the North Omaha community, and are dedicated supporters of the March of Dimes

They nurture their long-held passion for music as governing members of the Omaha Symphony, and Elissa as “Suzuki practice guru for our kids.”

Neil continues, “Our greatest joy is raising our three children and seeing them embrace the core values we developed while at Bethel: faith in God, a spirit of service and compassion, and a drive for excellence.”

Neil and Elissa are important sponsors for Bethel’s annual Summer Science Institute for high school students. Neil says, “It is our hope that this experiences shows potential students a glimpse of how much Bethel has to offer. We can’t wait to have our children attend.”