From Teaching to Administration and Back Again

Brad Born started his undergraduate years at Bethel (in 1980) and finished them at Tabor College. 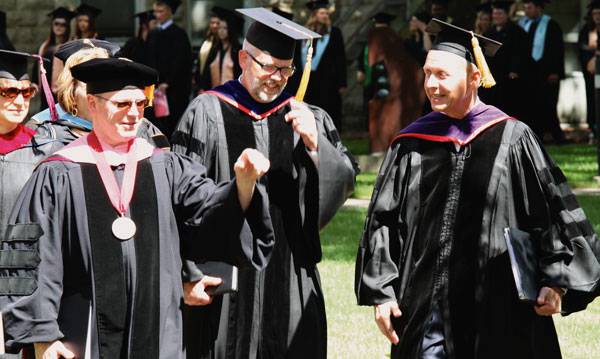 One thing Brad Born especially enjoyed about being vice president for academic affairs was the “ceremonial features.” He is pictured, center, at Commencement 2015 with President Perry D. White, left, and commencement speaker LaVerne Epp.

He returned to Bethel in 1995 when a former professor, John Sheriff, recruited him to teach in the English department. Ten years later, in 2005, he left teaching for fulltime administration and now, another decade on, has left administration to return to teaching.

Born was an associate dean (along with three other faculty members) in 2004–05, when Bethel underwent an extensive academic program review under then President E. LaVerne Epp ’72 and Sheriff as academic dean. When Sheriff moved into the interim president role in 2005,

Born became interim academic dean. Later, when Sheriff decided to retire rather than return as dean, Born tossed his hat into the ring of a national search for Sheriff’s replacement.

Last fall, Born announced he would be stepping down as vice president for academic affairs. He’ll take a year off to prepare for a return to Bethel in fall 2016 as fulltime faculty in literary studies. Although he has taught the occasional interterm course, and twice co-led the Diversity Seminar with George Rogers ’69, during the past decade, there have been significant changes in technology, student demographics and higher education in general during that time.

Reflecting on his decade in administration, Born said, “There’s a difference between administration and faculty, but faculty don’t understand it until we do it—and that is that administration is much more collaborative. It sounds almost cliché, but you do almost nothing apart from the group. That’s very different from the autonomy and individualized responsibility of designing, prepping and delivering a class.

“I was always working on projects with one or more other persons, whether it was Denise [Krase, administrative assistant], the registrar, the cabinet, the athletic director. It was a very rewarding part of the job, that sense of sharing the accomplishment with others.”

Even all the report writing his job called for had that sense, he said. “I’m hardwired to think and work that way [required for reports] and to slog through it. I won’t say I’ll miss writing Higher Learning Commission self-studies but it’s another project that involved multiple people, coordination and organization.

“What I missed about teaching was the direct, everyday contact with students. In this job, the contact tended to be in times of crisis— a grade appeal, suspension, not able to graduate. I don’t wish the crisis for them, but it is rewarding to be with them and help them when they are.”

Finally, “I liked the ceremonial features of my position—the formal opening of school, awards to students and faculty, commencement.”

That said, Born looks forward eagerly to “all the things that attracted me to teaching from the start.

Sheriff, in a “recognition of service” for Born at the spring Board of Directors meeting, said, “Students are fortunate you are returning to teaching fulltime, eager to engage—with your unforgettable hand gestures and your voice that intones the gravity and depth of the ideas presented.”