A Legacy of Friendship

Though he was in the development office for 15 years, Fred Goering has devoted most of his life to sup- porting Bethel College. 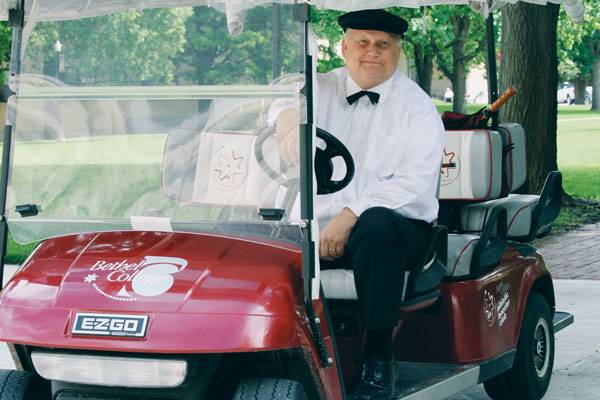 Goering, director of development since 2000, announced his resignation effective June 30, expressing a desire, as he said, “ to transition into retirement.”

Goering came to Bethel in the middle of the “Leave a Legacy” capital campaign that resulted in the construction of Voth Hall (2000) and Krehbiel Science Center (2002).

He also noted on his personal development timeline the campaign to build Thresher Stadium (2005) and the major renovation of the former Science Hall into Will Academic Center (2012).

But the most consistent item on Goering’s list has been the Bethel College Annual Fund. One of his successes through his 15 years is that “we met our goals almost every year.”

What he’ll remember most, he said, is “wonderful friends and relationships.”

“I love Bethel’s loyal constituents,” Goering said. “It has always been one of my goals to help further the work of Bethel College, to let people know what an enjoyable place it is and the good that it does. I value that as much as anything.”

Goering has strong family ties to Bethel that he values as well. He and his first wife, the late Donna (Waltner) Goering, both graduated from Bethel (in 1972 and 1973, respectively) as did their three daughters, Kim Cutting ’99, Shana Goering Gingerich ’00 and Megan Waltner ’02. Goering’s wife Beverly ’72 and sons-in-law Jared Gingerich ’02 and Jarod Waltner ’04 are all Bethel alumni.

“In the past year, I’ve been given the opportunity to work and learn from Fred, and I can tell you that Bethel is at the heart and core of his being,” said Pam Tieszen, vice president for advancement. “His relationships with Bethel alumni and friends built a strong support system for the Bethel Fund and numerous campus projects over the years.”

Tieszen pointed to a couple of statistics. “The cumulative Annual Fund total for Fred’s 15 years is $17,219,130—and that doesn’t include the many designated gifts and scholarships he also brought in to support the college. During Fred’s tenure, 7,488 students passed through Bethel, which translates to $2,311 per student.

“Fred’s resignation is a great loss for our department and for Bethel. We wish him well in his transition.”