LaVon Ediger ’62, Bethel’s 2016 Outstanding Alumnus, found a way to take his skills in construction and turn them into a means of serving some of society’s most vulnerable. 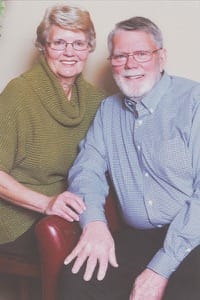 Ediger moved to McPherson in 1974, where he built the large and successful Stewart-Ediger Construction, which mostly specialized in commercial projects.

As an employer, Ediger had a heart for people with life challenges. He would often hire individuals who had difficulty finding or keeping a job with other companies, mentoring them and giving them extra attention when needed.

As the owner of a construction company, Ediger became increasingly troubled with the usual practice of throwing away perfectly good used building material as businesses would upgrade and modernize their buildings. He would sometimes bring castoffs to his church, First Mennonite in McPherson, to be reused, or would store them in his own shed for possible future use.

Ediger’s interest in music and singing led him to join the Kansas Mennonite Men’s Chorus. While riding in a bus on a concert tour with the KMMC in the eastern United States, and following a visit to the Akron, Pennsylvania, headquarters of Mennonite Central Committee (MCC), Ediger had what he calls an “Aha!-God moment”—the idea of opening a thrift store to sell used building materials.

He shared this idea with Sunday school classes and others at First Mennonite, especially when the congregation discussed goals and visions, and kept the idea alive as he moved into retirement.

Shortly after retiring in 2007, Ediger began putting his skills, contacts and energy into creating and opening, along with others from First Mennonite, the ReUseIt Center in McPherson. The store’s purpose is to collect and sell used and donated building materials in order to keep them out of the landfill while supporting MCC and local nonprofits with the proceeds.

Another benefit of the ReUseIt Center has been to connect with the Omega Project, which has as its clients men recovering from addiction.

The men go through a period where they are newly sober but not yet ready to handle regular employment, and need ways to be involved in the community. Ediger’s gifts for working with those on the margins of society and/or with special needs have helped create a close connection between the two ministries, ReUseIt and Omega Project.

Ediger and his wife, Linda, are parents of three and grandparents of six. In addition to being active in his church and volunteer work, Ediger enjoys woodworking and continues to enjoy making music.

Ediger will receive the award and be honored along with other alumni award winners at the annual Alumni Banquet, June 4 at noon in Memorial Hall.