Bethel’s Distinguished Achievement Award winner for 2016, in 35-plus years as a biochemist, developed therapies to help those suffering from some common but serious illnesses. 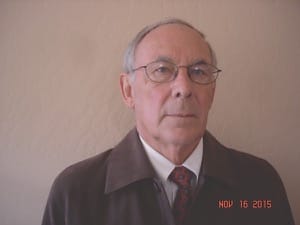 Among the many accomplishments of Duane Schroeder ’62, Orinda, California: inventing the first intravenous gamma globulin sold in the United States to treat severe immunodeficiency and developing therapies for hemophilia, emphysema and thrombosis.

His laboratory worked to speed the testing of biotechnology products to fight HIV and pulmonary disease. Later, he directed the transition to genetic engineering of new proteins.

Schroeder is the co-author of several dozen journal articles related to his research over the years.

Schroeder and his wife, Lois (Epp) Schroeder ’63, are the parents of three and grandparents of 11. His hobbies include working with metals, from jewelry through cars, and family genealogy.

Schroeder noted that, growing up on a farm in rural Moundridge, he learned equipment repair and maintenance from his father and uncles. From his early teens, he began to build a hot rod based on a 1926 Model T Ford with a high-powered Chrysler V8 engine—a purple coupe he drove during his Bethel days and which he still has, taking it to car shows and drag racing events.

These days, he uses his welding and construction skills to make artwork and jewelry for friends and family.

He said his long-standing interest in genealogy also started in his Bethel days, with assignments in his Mennonite History class with Cornelius Krahn.

Schroeder will receive the award and be honored along with other alumni award winners at the annual Alumni Banquet, June 4 at noon in Memorial Hall.