David ’78 and Dorothy Ewy Boldt live on a farm in Parlier, California, where they have two ornamental fruit trees that bloom early each spring. They are not just beautiful—they are a reminder of two farmers who tried to be good neighbors both when things were going well and when they got hard. 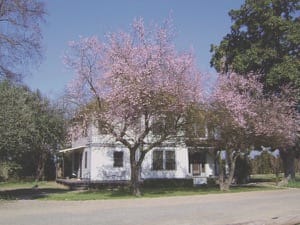 Around the turn of the 20th century, immigrants from different parts of the world began moving into California’s Central Valley, where Parlier is located.

In 1906, Gensuke Katsura emigrated to California and bought a farm on the banks of the Kings River. About the same time, a young Finnish merchant marine, Karl Laine, purchased a little farm nearby with a chunk of gold. In 1913, Reinhold Ewy, with his mother, brother and sister, moved from Butterfield, Minnesota, and bought the piece of land between these two men.

But in the early 1940s, times got hard, for reasons that had nothing to do with farming. On Dec. 7, 1941, Japan bombed the U.S. Pacific Fleet at Pearl Harbor, drawing the United States into World War II. By midsummer of 1942, all Japanese Americans living in the western United States were to be exiled to relocation camps, simply because they “looked like the enemy.”

Reinhold Ewy’s pastor, former Bethel president and 1902 alumnus J.H. Langenwalter, quietly offered the Reedley First Mennonite Church as a site for immunizations for those being sent to the camps.

Japanese Americans in the Central Valley were forced to pack only what they could carry. “Our neighborhood got its first mini-storage,” Dorothy says, “as chicken coops were filled with belongings of dear neighbors. … When school resumed [in the fall of 1942], empty desks sat where once thousands of young Japanese Americans had studied.”

The farmers had a whole other set of difficult decisions to make. They could neither store their harvests nor take them along.

Gensuke Katsura had by then spent his adult lifetime developing a farm and had a year’s worth of labor invested in a crop. Over a handshake, Ewy agreed to see to it that Katsura’s farm would be taken care of as though it were his own.

When the war was finally over and the Japanese-American families returned to their farms, Ewy and Katsura sat down to review the detailed account of income and expenses Ewy had kept. Ewy was shocked, however, when Katsura said there was an error in his record keeping.

Katsura had noticed that no payments to Ewy for his services had been recorded. Ewy simply replied that he would not make a single penny of profit from this horrible injustice that the United States had done to his friend and neighbor.

Sometime later, Katsura, who had a beautiful traditional Japanese garden, brought Ewy two little trees he had budded with wood of a special ornamental fruit blossom. Would his friend Reinhold accept this as a token of appreciation?

Ewy planted the trees outside his bedroom window. More than 70 years later, they still bloom every year around the annual Day of Remembrance for Japanese-American internment, Feb. 19. On that day in 1942, President Franklin D. Roosevelt signed Executive Order 9066, beginning the process of uprooting and imprisoning 120,000 Americans of Japanese descent.

“These blossoming trees remain a symbol of two good neighbors during difficult times of war,” says Dorothy. “We share the story of these trees in the hope that such injustice will never happen again.”