Whatever Ami Regier ’85, Bethel professor of literary studies, might have expected from venturing into prison, it wasn’t that the experience would make her a better teacher and person. 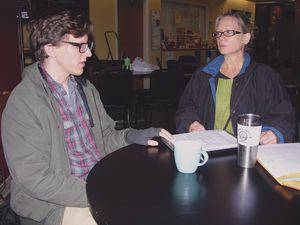 Will Shoup, left, and Ami Regier, professor of literary studies

Regier has been traveling to the East Unit, a minimum-security section of Hutchinson Correctional Facility (HCF), regularly since last spring. In fall 2014, Will Shoup, a senior literary studies major, joined her.

Regier began the class, coordinated through the Prison Arts Project of Offender Victim Ministries (OVM) in Newton, after a letter from a group of HCF inmates ended up on her desk.

In fall 2013, Regier received a moving letter addressed to ‘the Bethel College English department,’ asking for a writing course that would include grammar, poetry, fiction and drama.

Even though Regier felt like she didn’t have time to take on a new project, she couldn’t get the letter out of her mind.

I took [it] seriously, she says. I thought it was really true that in a nation with the largest incarcerated population in the world, writing skills would be truly important for the future of persons needing to reconstruct their lives with employment.

I was very impressed with John McCabe-Juhnke’s project [the Bethel professor of communication arts has been doing prison theater at HCF for the past decade]. I was turning 50 in January [2014], so I thought I probably was finally old enough to try something difficult, requiring a bit of courage.

Regier began working with OVM staff to craft a proposal to HCF, which was approved in February 2014. She then went through the background check, fingerprinting and volunteer training process for the prison, and started the class in April.

The project was one of the reasons Will Shoup decided to transfer to Bethel from Wichita State University.

My interest in working with prisoners stems from a friend who does prison ministry in Pratt, where I’m from, Shoup says. When I came [to Bethel], I was awarded a Service-Learning Scholarship and I wanted to do something I felt strongly about.

I talked to Ami and she said she would welcome help. I’m a creative writer—poems, short stories, I’m working on a novel. I thought I could be useful, and I think I have been.

When Regier began the writing class, she agreed to one 8-week session—but ended up enjoying it so much, she signed on for another class in the fall.

It was renewing, she says. It made me want to be a better teacher.

The men say they can’t speak and relate and talk about their lives outside the classroom—it is a ‘human space,’ where people support each other and value their time together.

I’ve told them a certain percentage of college students under-value or under-appreciate that. I’ve gained a new appreciation of the meaningful space [that is] a college classroom.

I’m constantly amazed and surprised—in a lot of ways, the [students at HCF are] so much more interested and animated than ones [in college classrooms], he says. It’s rejuvenating. They want to be there and they want to learn.

For their last session before Christmas break, Regier and Shoup used a true workshop format for the first time, though the class, which averages 8–10 men, had already done sharing of and group responses to class writings a number of times.

It’s amazing to see the genuine reactions [the men] are willing to have, Shoup says. At least within the confines of the classroom—I don’t know how much this carries over into daily life—there is a lot of vulnerability, willingness to share, and to share emotionally, which I rarely see in classes on a college campus.

What they say about life-writing supports research that says it helps [inmates] cope and improves recidivism rates, Regier says. I have more appreciation for memoir-writing now and a stronger sense that I need to do it.

Although the class has not required writing within certain genres or structures, two of the attenders have begun life-writing projects, with two more planning to start.

‘Charles’ and ‘Dylan’ have said they have ADHD, and that writing helps them sustain focus long enough to think more effectively about their lives, Regier says. They feel they now understand the actions of family members and their own actions more.

These folks are also saying writing is helping them make better behavioral choices. I don’t know if that is true, but I hope so.

Doing this [prison class] is helping me understand the research I’m making my poor, tortured [Bethel] freshmen do on the health benefits of writing, she adds. It could actually help with mental and physical health.

We need a lot of shared reading, and reading in a less intensive way [in the class], to build trust and repartee, Shoup says, between us as teachers with the students and among the guys, because they’re not all from the same social group, even within the prison. It’s taken a while to get to where we are but it’s really exciting.

Shoup says his own writing has benefited from the interaction with class members.

It helps challenge me in form, he says. A lot of these guys don’t have a background in structure—they’re just writing. There’s a kind of freedom in that that’s useful to get back to every now and then—not worrying is this an essay or a poem, or is this poem a sonnet.

About every three or four times, I’ll bring something I’ve written. They’re really responsive [and not] overly academic. It’s rejuvenating to have people interested and actively responding.

The men have given me an assignment, Regier says, to write poem on ‘how this experience has transformed you.’

I see that I’ve viewed inmates as scary offenders. I didn’t realize how deep my prejudice probably was.

I really like going to see the people I see on Monday night. I think of them as friends. It’s making me value in-person friendship differently.

I’m not a people person. I think that is shifting a little for me. Normally, I would rather e-mail someone than talk to them in person. But here it feels important to shake hands—the guards wear gloves and choose not to make direct contact, so Will and I make a point to shake hands when we come in and when we leave. It’s clear there’s a connection there.

I think [the men] have a thirst, a starvation, for genuine interest in what’s going on in their minds, Shoup says. The day-to-day routine, the guards, other prisoners, don’t put a lot of value on their stories, their life-writing.

Our [HCF] students want to write, says Regier. They feel unheard and they desire to have a voice.