Not in Kansas any more

Students responded to Professor Bobby Lloyd’s passion for travel in Latin America by lining up to enroll in his interterm class that went to Panama, Ecuador and Colombia. 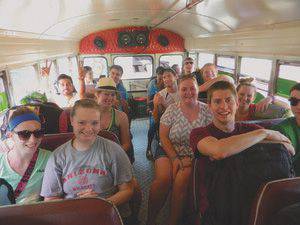 Bethel students on a bus from Colon, Panama, to Portobelo, Panama.

When professors are passionate about something, students pay attention.

During the 2013–14 school year, Bobby Lloyd, assistant professor of business and economics, presented one in a series of Here’s What’s Cool convocations. He talked about several of his passions, including travel in Latin America, and finished by mentioning he was organizing an interterm trip for January 2015.

When I came here, says Bobby, who began teaching at Bethel in fall 2013, I heard that professors could organize travel courses. That sounded good to me, and I figured the best would be someplace I’m familiar with, where I speak the language.

One of Bobby’s two undergraduate degrees is in Spanish. He is married to Paula, a native of Colombia, and together they’re raising two bilingual daughters.

The result of Bobby’s casual convocation announcement was one of the most competitive interterm application processes in recent memory.

When he did Here’s What’s Cool and talked about all his adventures, that got everyone very excited, says sophomore Drew Trollope.

[About a half-dozen of us] met in his office before registration with our laptops, waiting to press Add Course [at the stroke of midnight March 3, 2014] when classes opened.

I really wanted to travel for my final interterm at Bethel, says senior Michelle Unruh. I attended Bobby Lloyd’s Here’s What’s Cool convocation, in which he talked about his love for traveling, especially in South America. He gave a shout-out to this trip he would be leading, and I knew I needed to go. 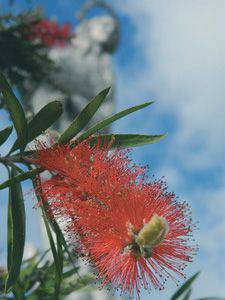 Drew and Michelle made it in on the first try but neither sophomore Tyler Kaufman nor senior Jaime Tschetter was so fortunate.

I hadn’t planned on this trip at first, but when I went to Bobby Lloyd’s What’s Cool convo, I thought, He has the experience, and South America is a place I want to go, Jaime says. That night, he e-mailed me about coming on the trip. I thought that was a sign.

When it came time to enroll, Lisa [Goering] and I camped outside Mojo’s [closed at the time] to use the wifi. It was really cold, so we had on hats, scarves and coats. But I still got wait-listed.

Getting into this class was indeed very competitive, says Tyler, one of those stationed outside Bobby’s office. Once the clock hit midnight, it was a mad scramble to try and get on to ThresherConnect and successfully sign up for the course. 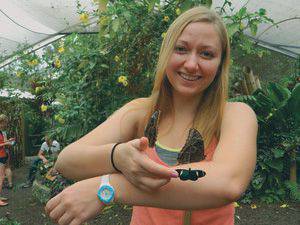 Lisa Goering with a new friend in a mariposario (butterfly garden) in Mindo, Ecuador

He also ended up on the wait list. Being as Professor Lloyd is one of the hardest-working professors on campus, Tyler says, he stayed up the entire rest of the night figuring costs and trying to see if it would be possible to bring along a couple extra students.

It was a very stressful minute leading up to midnight, adds sophomore Shelby Howard.

Bobby had initially thought he could take only 6–8 students. In the end, he determined it was possible to take everyone who wanted to go, which turned out to be a total of 13. In addition, Paula’s brother, Nicolas Prodomo, and cousin, Alejandro Marulanda, agreed to join the group for some or all of the trip as adult chaperones.

The class Cross-Cultural Learning Seminar: An Immersion into the Business and Culture of South America took students to three countries, beginning with Panama.

The first thing Bobby had confirmed was a five-day sailing trip from Panama to Colombia, and he’d built the trip from there.

We visited some businesses [in all our locations], he says, but the point was more cultural, to get students out of their comfort zones.

All along the way, we talked about the different business practices we observed and how they might do things differently than we do.

It was very interesting to see how the stuff we learn about in our business classes gets put into real-world applications as we talked with the business owners, says Tyler. We saw lots of correlation and many similarities between the businesses in Ecuador and ones we are familiar with in the United States.

As it happened, stormy weather and rough seas forced cancellation of the sailing trip. Instead, the group traveled to Colombia by ferry. Jaime, at least, was relieved in the end because I got seasick just being on the ferry. 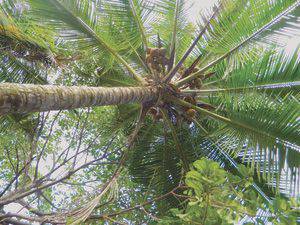 However, many of us were looking forward most to the sailboat trip, says Shelby. That did not end up happening because of 17-foot waves.

I was very impressed by how the group reacted to the change in plans. We all knew there was no way we would safely make it across the Caribbean Sea with those kinds of conditions in a small boat, which I think helped in keeping a positive attitude. The ferry trip was still fairly treacherous. We were all very happy to make it to Colombia.

¡Sorpresa! (Surprise!) might have been a theme for this interterm experience. And while the surprise of not sailing to Colombia was more pleasant for some students than others, it wasn’t the first one. That was finding out when they all arrived at the airport in Chicago Jan. 3 that they would be flying to Panama City first class.

The real benefits did not come to me until we landed, says Michelle, when we saw the effects of poverty in Panama. Being able to see both extremes that day was very powerful.

This trip was unlike any I’d ever taken before, says junior Lisa Goering. It offered us a multitude of opportunities and experiences that we likely won’t get again.

We flew first class and stayed in [some] lavish hotels, but we also visited an orphanage and stayed in a hostel without air conditioning that frequently had power outages. We interacted with homeless people and men who sold souvenirs on the street for a living, and we had our own personal doorman and a rooftop pool all to ourselves.

View of Cartagena, Colombia, from the ruins of San Felipe de Barajas castle.

Nothing about my experiences on this trip were part of my normal life here in Kansas, and I found that to be wonderful.

Another surprise came halfway through the trip. At our nightly meeting, Bobby handed a packet to each of us, Jaime says. These were letters he had asked our families to write to us and send along with him. He figured we’d be so out of our comfort zones that it would be nice to have a little piece of home.

Michelle had never imagined herself zip-lining anywhere, much less in an Amazon rain forest near Mindo, Ecuador.

Jaime and Tyler had never imagined eating guinea pig (called cuy locally). This included eating part of its liver, its eye and its brain, says Tyler, and Jaime adds, It did not taste like chicken, but I’m glad I can say I did it.

Jacob Miller, sophomore, was amazed by some of the housing options. The elegance and spectacle of our lodging blew me away. We stayed in some gorgeous houses, especially in Cartagena and Mindo. They had everything: old-timey luxury, breathtaking views, excellent dining services, pools and hot tubs, and more awesome stuff. 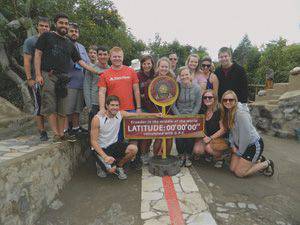 The trip surpassed my wildest imagination, Drew says. The culture, adventures, scenery and nature we encountered on this trip was amazing in every way possible. This trip was the best time of my college career, and maybe even my life leading up to this point.

In the end, however, it was neither food nor lodging nor recreational adventures that stuck with students the longest.

Many of my favorite memories include the various backpackers and locals we met, says Shelby. There were people throughout the trip who deeply impacted us and forced us to reevaluate our lifestyles and future plans.

Michelle says, Just outside Cartagena, we visited Niños de Papel, which helps troubled youth and children escape their lives of abuse and addiction. 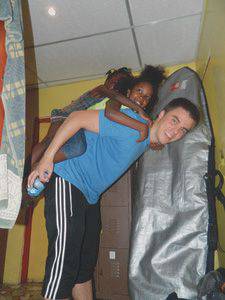 Sophomore Ryan Ford made some new friends at Niños de Papel, an orphanage near Cartagena, Colombia.

When we first met the children, they were so welcoming. It didn’t matter to them that we spoke different languages. These children who have experienced so much hurt in their lives were so quick to show kindness to us.

I would say my favorite part of the trip was bonding with the others in the group, Tyler says, and Michelle adds, I was surprised by the relationships formed with students I would not have otherwise interacted with.

It’s important to get out of your comfort zone and keep an open mind as you experience new cultures, and to experience as much as you can, says Jaime. That’s how you learn about yourself.

While we’re all here at Bethel to prepare ourselves for our different walks of life, this trip showed me many things that I hadn’t seen before, says Lisa. I had to leave Bethel’s campus for a short time to learn some of life’s most important lessons

One of our group members noted that as the trip went on, he became more comfortable with being uncomfortable. While different things make each of us uncomfortable, we all experienced discomfort in some way during this trip, but we adapted and learned from the experience.

Lessons like that are something that can’t be obtained in a classroom. Traveling to an unknown place [with] a foreign language is intimidating, but it can also turn out to be the best teacher of all.

January 2015 marked the 45th anniversary of the inclusion of a January interterm in Bethel’s academic calendar.

According to the 1969–70 edition of The Bethel College Thresher (yearbook), “the new experience of interterm” in January 1970 was a time of recitals and of “exploration.”

All senior music majors did recitals during January, along with a number of underclassmen and music faculty.

Other students took Linear Algebra, Business Law or Introduction to Linguistics. Some “discovered the techniques of clay and discussed life science in contemporary human affairs.”

And yes, there was travel.