Bethel’s 2014 Young Alumnus Award winner has dedicated her life to peacemaking and conflict resolution, especially with issues that affect women in the developing world. 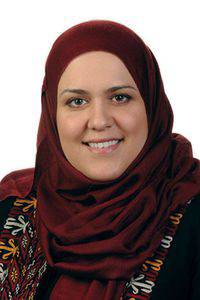 Palwasha L. Kakar, Woodbridge, Va., recently completed four years with the Asia Foundation, based in Kabul, Afghanistan. From January 2013–January 2014, she was the Foundation’s director of women’s empowerment and development programs. At the end of January, she joined the staff of the U.S. Institute of Peace in Washington, D.C., as senior program officer for religion and peacemaking.

Kakar was born in Seattle to medical-student parents—father from Afghanistan, mother from south-central Kansas. When it was time for her to go to college, she chose Bethel, the alma mater of her maternal grandmother, the late Ruth (Smith) Graber ‘46, where Kakar did her undergraduate work in global studies, and Bible and religion, graduating in 1999 with a B.A.

Among the benefits of her Bethel liberal arts education, Kakar is quick to credit the opportunity for gaining practical mediation skills through the Kansas Institute for Peace and Conflict Resolution (KIPCOR).

Her first job upon graduation was director of the Newton Area Peace Center, which is now Peace Connections.

Kakar has continued to hone and use her skills in program management and grant writing.

She has a decade of international experience in conflict and post-conflict settings in Afghanistan, including working with religious leaders and institutions on peace-building and women’s rights, and addressing differences in religious sects and groups regarding women’s issues and violence.

She has directed program planning; led team operations; managed contracts and relations, including communications and reporting to donors and government; and coordinated the financial, budgeting and personnel aspects of grant implementation.

While with the Asia Foundation, Kakar managed projects totaling up to $21 million with up to six national non-governmental organizations in 15 different provinces in Afghanistan. She organized workshops with participating religious leaders from all 34 provinces and arranged study visits to Egypt, Turkey, India, the United Arab Emirates and Malaysia as a mechanism to expand horizons of local religious leaders.

During her four years at the Asia Foundation, Kakar also served as senior program adviser on research, women’s rights, Islam and development, and program manager for the Access to Justice and Women’s Rights in Islam project.

Prior experience includes managing a small grants program under the auspices of the United Nations in Afghanistan’s civil society initiatives, and serving as program manager in charge of establishing the Gender Studies Institute at Kabul University.

She has done short-term consultancies with the U.S. Agency for International Development (USAID) and the World Bank, among other organizations.

Kakar is fluent in Pashto and English, proficient in Dari, and has basic knowledge of Urdu and Arabic. She has written extensively on women’s rights in Afghanistan and Iran.

Kakar is married to Noorullah K. Kakar. They are the parents of three daughters, Huma, Rema and Sima, and one son, Wadaan. Palwasha is the granddaughter of Erwen Erv Graber of Moundridge.

Kakar reports that she does take time for a few hobbies. Beyond the work that I do, which has been immensely rewarding, I enjoy collecting antique embroidery, beads and jewelry, and designing fusion clothing and accessories, she says.

Of course, I enjoy travelling to learn about local histories and cultures, especially with my family. Something I do that is between work and hobby is mentoring other young Afghan women, either through work or outside work in as many creative ways as I can think of.

Kakar’s Young Alumnus Award presentation, originally scheduled for March 14, will be April 14 at 7:30 p.m. in Krehbiel Auditorium. This year the Alumni Association and Kansas Institute for Peace and Conflict Resolution will co-host the event.

The Awards Committee of the Bethel College Alumni Association names one or more Young Alumnus Award winners each year. The Young Alumnus Award recognizes character and citizenship, achievement or service rendered, and honors and recognition received. The recipient must be 39 years of age or younger and present a convocation program for Bethel students, faculty and staff.