Penner Math One of the Many Distintinctives for Outstanding Alumna

After 46 years of teaching mathematics in Lincoln, Neb., it’s no wonder Leona Penner has a math method named for her. 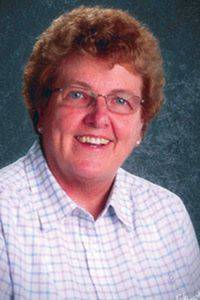 Penner is the 2014 recipient of Bethel College’s Outstanding Alumnus Award. She graduated from Bethel in 1966 with a B.A. and majors in math and German. She spent a year at Philipps University, Marburg, Germany, during her undergraduate years, and later earned an M.A. for mathematics teachers at the University of Nebraska–Lincoln.

Penner retired in May 2012 after teaching mathematics for 46 years. From 1970–2013, she taught an integrated math course specifically designed for gifted and motivated students. The program is called Elements of Mathematics, although in Lincoln, it became known as Penner Math because it defined her and she defined it.

Penner began teaching at East High School in Lincoln in 1968. After two summers of training in Carbondale, Ill., she inaugurated Elements of Mathematics at East High in 1970.

She taught a problem-solving class (which she created) at East in 2007, 2008 and 2010, although her teaching emphasis was always on problem solving and development of mathematics, she said.

Simultaneous with her career in teaching math, Penner was also  a coach of teams in both mathematics competition and in basketball. From 1975–80, she conducted summer basketball clinics for girls  in grades 7–12 and, from 1978–81, she was the faculty sponsor for the Fellowship of Christian Athletes chapter at East High School. She coached East High girls’ basketball from 1974–81, compiling a record of 106–24, earning several conference championships and a state championship and establishing a 48-game winning streak.

In the summers of 2000, 2001 and 2002, Penner was an invited participant in an international collaboration, under the auspices of Better Practices in Education, with teachers from Bulgaria, Hungary, Romania and the United States in developing a problem solving approach to teaching mathematics. The group met twice in Bulgaria and once in Romania.

In 2013, Penner was part of a Guinness World Record-setting MATHCOUNTS group that had the fastest time assembling the first 25 rows of Pascal’s Triangle as a human formation.

Penner was honored in Washington, D.C., three different times—in 1987, 2006 and 2008—as most influential teacher of a Presidential Scholar Winner.

She was nominated as Teacher of the Year for Lincoln Public Schools in 1982 and for a Christa McAuliffe Teaching Award in 1988. She was selected as a Nebraska Math Scholar 1986–88, one of 66 outstanding Nebraska teachers chosen, and she received the Presidential Award for Excellence in Mathematics Teaching in 1989.

Penner will receive the award and be honored along with other alumni award winners at the annual Alumni Banquet, which this year will be held the first Saturday in June (June 7), at noon rather than in the evening.