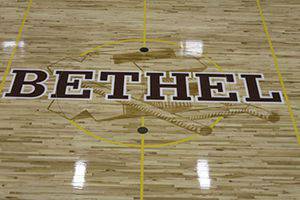 The public was invited to come see the brand-new floor. Anyone wearing Bethel College attire earned free admission to the Jan. 11 game, and T-shirts were given away during the game.

One new element in the floor’s design, a nod to the history and tradition of Bethel athletics, is a watermark of a threshing stone at center court. Also, building on existing Bethel branding, the athletic font has been changed from lowercase to uppercase.

The emphasized colors are the Bethel maroon and gray, with yellow incorporated through the volleyball lines. These lines now take precedence on the court to acknowledge new volleyball rules and their enforcement by officials, which dictate continuous lines.