The first thing Bethel nursing students who traveled to Haiti before Christmas received was culture shock. But what they brought home was gratitude. 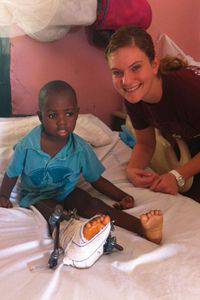 Senior nursing major Erin Hilger in the hospital in Hinche, Haiti, with a boy injured months earlier in a car accident. Photo by Geri Tyrell.

Regier is involved in an education initiative in Hinche that Bethel, HOPE International Development Agency-USA and Don Fast ’68 of Newton-based HUDDLE Inc., an education consulting business, are cooperating in. She had planned to go there at fall break, in October, but couldn’t get her paperwork completed in time.

Tyrell has taken several groups of nursing students to Haiti but she hadn’t intended to do it in December 2013 because she and Doug Siemens ’84, associate professor of education, were taking a group there in January 2014.

These students approached me, she says, adding that their commitment to taking the trip convinced her to agree to lead the extra one.

For all the nursing students, it was their first trip out of the country for anything other than a vacation. They had heard stories from Tyrell, instructor Laura Prahm ’12 and other students who’d been to Hôpital Ste. Therese in Hinche, where Wildy Mulatre ’94 is a health-care administrator.

We expected them not to have the resources we do or to use the practices we’ve learned, says Naura Harlow.

But it was worse than we expected, adds Scott Musgrave.

If someone gets hurt, it’s not if they get an infection, it’s when, says Erin Hilger.

Sometimes there were resources that went untapped. Ashley Morris recalled a patient with high blood pressure. There were blood pressure meds in the storage room, she says, but no one knew how to use them.

The students met a 3-year-old boy who had a serious foot injury after being hit by a car. He had been in the hospital two months and had to have a dressing change every other day, without any pain medication first, which the students say was hard to watch.

We taught him how to cough and do deep breathing to help clear his lungs, since he sat in bed all day, says Harlow.

The care is focused on getting the task done—it’s not holistic [the way we’ve learned], says Alexis Renteria.

However, Lacy Smith noted that coming into the nursing program, we probably had a lot of the same attitudes as the health-care workers at Hôpital Ste. Therese, many of whom are still students.

It was just different there, says Renteria. They did CPR wrong.

But Smith responds, It’s not wrong, just not how we do it. It was effective.

For the resources they had, and what they’d learned, [the care] was amazing, adds Harlow. 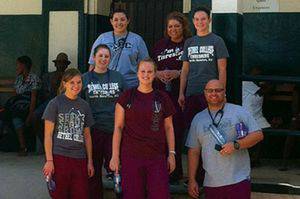 One thing I found positive, says Musgrave, was that since there wasn’t a cafeteria [or food service], families would bring the food, and they would bring it for others [not in their family]. They always made sure everyone had food, even if it wasn’t much.

The Haitian health-care workers are very resourceful, says Smith. We might feel they shouldn’t reuse things, but they only had what they had. They think we’re wasteful. (The group brought their own supplies, such as gloves, so as not to deplete the hospital’s scarce resources, and left everything they didn’t use behind.)

As bad off as some of the kids were, they really smiled a lot, Renteria says. Of course, part of it was seeing foreigners, and we gave them suckers. But they were in pretty good spirits—I wouldn’t have been, after two months in the hospital.

The group stayed with the Mulatre family and experienced a Kréyol church service as well as having time to explore the town of Hinche.

They were very comfortable at the Mulatre home, the students say, but still returned with new gratitude for air conditioning, water bottles and hot showers.

In Hinche, they especially appreciated the park. There were kids and parents all around, playing volleyball, basketball, soccer, says Smith.

It was the life of the community, says Harlow, and Smith adds, It was an outdoor community center.

I would sit down and instantly be surrounded by kids, Renteria recalls.

The Bethel students also enjoyed their contact with the nurses at the hospital, which was more successful than in the past, Tyrell says.

On the first day, it was ‘Oh, here are those crazy white people again,’ she says, but then we went to their class in the evening, and they got a better idea what we were doing. There was more engagement.

Here in the U.S., the holistic aspect of nursing is important, she adds. We struggled with communication, but our translator did a great job helping us make contact. There was a lot of nonverbal communication to let people know we cared.

The students agreed that wanting to experience a different culture was a primary motivation for going to Haiti, and that it made them appreciate the training and resources they have available.

I wanted to see a different health-care system, says Hilger. Until you see [for yourself], you can’t understand or be grateful for what we have here.

I take a lot of things for granted, says Renteria. I’ve always been able to provide what I need and want for myself and my son. I hoped I would come back a little less selfish.

I hope we were able to do some of God’s work, to give back, says Musgrave.