Across a border of security checks and locked doors, students enter a new culture for lessons on visiting those in prison. 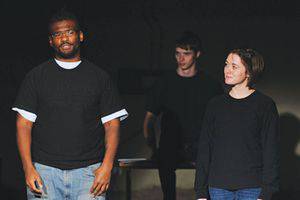 Lucky, an inmate of Hutchinson Correctional Facility, left, and Katie Schmidt, Bethel junior (with freshman Isaac Dunn in the background), rehearse a scene from Inside Story, which they performed at HCC in late January. Photo by Audra Miller.

January at Bethel is often the time when students opt for a cross-cultural experience—in Costa Rica, Mexico, Europe or Israel/Palestine, for example. In 2014, 10 students went to prison.

Last fall, John McCabe–Juhnke ’78, professor of communication arts, transitioned out of his long-time role as director of forensics and became director of theater.

As he tried to figure out the best configuration for performance opportunities, he decided to try to work one of his passions of the past decade—theater in prison—into a class offering. Interterm is a good time to take advantage of for an intensive project, he says.

The result was the Prison Theater Pilot Project, a collaboration with a group of Hutchinson Correctional Facility inmates on a theatrical production, offered under the auspices of the Prison Arts Project of Offender Victim Ministries, Newton.

Inside Story combined dramatic monologues and first-person reflections with journal entries from students and inmates into a documentary-style presentation that explored issues of cultural, community and individual identity as expressed in stories people tell about their lives.

During the first three weeks of January, John and the students traveled to HCF three times a week, spending two hours each time with the group of seven men. There were evening rehearsals in the two weeks leading up to the performances.

The first two of those were in the prison—one for inmates and one for community members. Feb. 7–8, an adaptation of Inside Story took place on the Krehbiel Auditorium stage, with the students assuming some of the roles the inmates played inside HCF.

OVM got a dollar from every ticket sale to help support the Prison Arts Project, and John reports that a couple hundred dollars came in, even with students, faculty and staff admitted free.

But perhaps a longer-lasting value is what the Bethel students took away from the experience.

This was in many ways a cross-cultural conversation, John says, although the students probably learned more about prison than the inmates did about Bethel.

Prison really isn’t as scary of a place as it is made out to be and, believe it or not, there are actually a lot of really nice people who are in prison, junior Jesse Voth–Gaeddert says. If I would have met any of the inmates we worked with outside of the prison, I would not have known that they were inmates.

They are in there for not-so-nice reasons but, for most of them, the poor decisions that put them in prison were made [long ago] when they were young and in desperate situations. They are obviously not the people they once were. 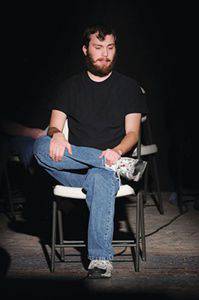 Luke Loganbill in a scene from Inside Story, a collaboration between Bethel students and inmates at Hutchinson Correctional Facility. Photo by Audra Miller.

Junior Luke Loganbill says he found it was weird to call them criminals, or even inmates—so I don’t. I call them friends.

I learned not to react on the stereotypes from TV, movies and mass media, he continues. We’re all people. We’ve all made mistakes. But some of us have ended up behind bars.

The most important thing I have learned is that people are people, junior Katie Schmidt concurs. I find that these men I have met in prison teach me about humanity and justice and stereotypes and choices every time I see them. I’m rethinking things because of these guys.

She continues, This was a total education about things I’ve never had reason to think about before. We’re taxpayers—we’re part of the society that creates prisons and creates the reasons people go to prison. It’s to our advantage to learn what this is really about.

For many of the students, being a Prison Theater Pilot Project participant, or PTP3, came on top of a for-credit interterm class.

I was a little unsure about whether I wanted to commit the time, though, since I was already going to be taking four hours of classes during interterm.

But I decided I couldn’t turn away the opportunity to take part in a theater project with a diverse group of people in a new environment. Besides, all college students are super-busy anyway.

I wanted to do this project because I know that anything with John is an adventure, says Katie. After hearing him pitch this idea to us and hearing how passionate he is about this type of story in particular, I wanted to be in on whatever strange adventure it would turn into.

Katie, an experienced actor, had worked with John as a director. For most of the students, however, this was their first time on stage.

Freshman Isaac Dunn was one of the few who had been in the prison before, since he began last fall as a volunteer for M2, OVM’s prison visitation program at HCF. However, he says, I had never done theater before, so this seemed like the logical next step.

The term pilot project means John hopes to make this kind of collaborative theater venture (he got the idea after learning about a professional dance troupe that does something similar in a women’s prison) part of the Bethel theater curriculum.

One of the primary reasons I wanted to involve students, he says, is because of the powerful experience of making theater with people who recognize the incredible privilege it is to perform. I think Bryce’s journal hits the nail on the head, when he says it’s refreshing to work with people who really want to engage in the learning environment.

Another reason is that the project is so central to what Bethel hopes to accomplish with its students. Our mission values ‘an ethic of service, deems concern for the powerless to be intrinsic to the Christian gospel and stresses peacemaking and voluntary service.’

One of my mentors in prison arts programming, Elvera Voth ’46, once said, ‘We’ve won in the lottery of life.’ Working with prison inmates reminds me of that truth again and again.

I had the opportunity to talk to my parents about my experience as a PTPer, says Luke. My mom mentioned how excited and passionate I was about PTPP.

I jokingly said it seemed like a ‘prison is changing me into a better person.’ After considering this, I think I spoke the truth. This was a new experience that is shaping me into a new person.