Off to a Strong Start

Bethel Faculty and Staff strive to be students' "biggest fans," in athletics and all other areas of college life. 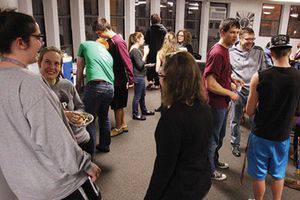 In the left-hand corner, Paige Townley (facing camera) is talking with first-year students Abby Phillips, left, and Heather Eddy. Paige is the resident director for Haury Hall, now a freshman-only residence, and coordinator of the new First-Year Success initiative. The event is a nacho bar that Haury hall parents put on during interterm in the Haury lounge. Gregg Dick ’87, seen at right (in gray sweatshirt facing camera) and Ada Schmidt-Tieszen (center background) are two of the 14 hall parents. Photo by Vada Snider.

Growing Bethel’s enrollment isn’t just about getting students here—it’s also about keeping them. So how does a small college of modest means in rural Kansas do that? One answer can be found in Bethel’s tagline and core values: Service. Some of that service is, of course, what students pay for. All of it comes out of Bethel’s service culture.

Paige Townley, in her first year as resident director of Haury Hall—which became, as of 2012–13, an all-freshman residence hall—has another title behind her name, director of First-Year Success.

This is a new position, geared to helping first-year students be successful, she says. I’m still trying to figure out my role. A lot of what I do with Aaron [Austin, vice president for student life] is try to figure out what the next steps are—to solidify the job description.

Paige’s position is a response to the question: What  can we do to help retain students, especially to help them be successful in the first year? Aaron says. Student Life and the Retention Committee together shaped the job description while knowing that the person coming in would also shape it.

The First-Year Success initiative and Haury as an all-freshman residence are part of the foundation of what Aaron calls a First-Year Experience program, which are fairly common. 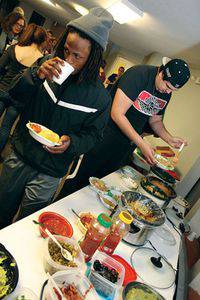 Freshmen Robert Smith Jr., left, and Gabe Chief Garza dig into a nacho bar that hall parents—staff and faculty volunteers who have adopted sections of Haury Hall for the school year—provided one evening halfway through interterm. Photo by Vada Snider.

Making Haury freshman-only means students can easily connect with one another without leaving the building, Paige says. They’re going through the same things at the same time—such as feeling homesick.

When first-year students could choose, it created de facto segregation, Aaron adds, because students who knew the college—and often those were the Mennonite students—would end up in Voth. Those who didn’t know or didn’t decide until late or couldn’t afford to pay extra would be in Haury.

Now they all come in together, live in the same place and have a chance to create some relationships that last. Another positive new action is to have tutors from the Center for Academic Development (located in the Will Academic Center) spend 10 hours a week in the Haury main lounge.

Bringing upperclassmen into Haury for academic help is beneficial, she adds. And I’ve been working to get the [resident assistants] to look at and think about the difference between first-year students and upperclassmen. I encourage more intentional interactions, such as RAs meeting with students to go to games or to things like Career Night—a way to encourage students to go to things, to get out and be involved.

Paige came to Bethel from central Pennsylvania, which is where she was born, grew up and graduated from college (Indiana University of Pennsylvania).

I spent three years at the main campus [in Indiana] and two years at the regional campus in Punxsutawney [as student life staff], which is specifically for first-year students. I think the first-year experience is so important—if it’s not fun, you’re not going to stay.

The Bethel job description sounded a lot like what I’d been doing at Punxsutawney. I found out during the interview that it’s a new position—so I’ve reached out to my former RD for her ideas.

Paige serves on the Retention Committee and meets regularly with the Liberal Education Advisers, the faculty who lead the required freshman course College Issues Colloquy.

We do well with our alerts system, Paige says, but some students feel overwhelmed when professors, advisers and RDs all get involved, yet they are still struggling. It’s about finding a balance of support without pressure. I’m trying to build the connections beforehand so students see that it’s coming from a place of caring, not just everyone is in my business.

We want to provide students with the tools to be as successful as possible in their first year, Aaron says. 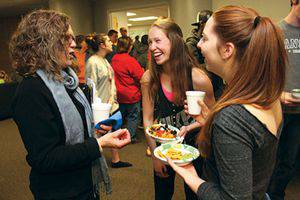 Ada Schmidt–Tieszen ’74, left, talks with two first-year students in the group she is a hall parent for in Haury Hall, Katelyn Fatten, center, and Katherine Fry. Photo by Vada Snider.

Probably as important as the academic tools are those that have to do with helping students feel at home.

Another new initiative this year, which the Staff Welfare Committee agreed to take on, is having hall parents for first-year students—one or two people adopting a section of Haury. It’s up to the individual or couple to choose how to interact with their students. Most have invited their group for a meal at some point, and try to remember birthdays and holidays (e.g., Valentine’s Day) with cards and treats.

It’s hard when you move away [from home] to feel that someone cares about you, Paige says. I want to make sure the students know that, but there’s only so much I can do as one person with 100 students.

Having hall parents allows students to connect with staff and some faculty in different ways, Aaron says. Students who come from far away need a way to feel more at home. This might give another option for someone to talk to.

I tell first-year students: ‘You need someone who knows you’re here.’ The hall parent program can help us put our arms around students and help them feel welcome.

Another relationship-based initiative came from Kent Allshouse, athletic director, when he asked faculty to consider being athletics mentors. Three took up the challenge: Gary Histand, professor of chemistry, for cross country, Mallory Marsh, director of forensics, for men’s basketball, and Barbara Thiesen ’81, co-director of libraries, for softball.

At Bethel College, we strive to educate the whole person, and athletics play an integral role in the educational experience of many of our students, says the athletics mentor job description. While the divide between athletics and academics is one of the most persistent divisions on American college campuses, at Bethel we strive to bridge that divide ... [and] foster an integrated learning experience for Bethel student-athletes.

Though an athletics mentor, by definition, builds relationships with more than just first-year students, part of Barbara’s interest came from being an LEA for the past several years, as well as from teaching yoga to students.

Yoga and CIC connect me with students—this is another way, she says. The softball team is still pretty new [now in its third season]. A number of the players have been in my yoga classes, and I’ll be working with Stacy [Middleton ’95, head coach] to come up with some more gentle yoga, some relaxing techniques, to complement their workouts.

While Barbara had played softball herself, Mallory knew nothing about basketball going into this.

She went to all the home games, both junior varsity and varsity, and as many of those within an hour’s driving distance as her forensics competition schedule allowed. 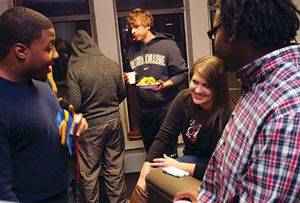 Mallory Marsh, director of forensics, talks with first-year students Steve Scott, left, and Brandon Burrell (Preston Gapter is in the background in the Bethel sweatshirt). Marsh is one of three faculty who volunteered to be athletics mentors. She picked the men’s basketball team. Photo by Vada Snider.

In fall, I taught two sections of Basic Public Speaking. Almost all my students were male, freshmen or sophomores, new to Bethel and played basketball or football, she says. By the time Kent brought the athletic mentoring idea to a faculty meeting, it was too late in the season for football, so I went with basketball.

Sometimes after an away game, we’ll go out for ice cream or dessert. I’ve baked cookies and brought them to games. Every once in a while, I’ll eat lunch in the caf with them. Just anything to say We’re supporting you.

Now whenever they see me, they’ll say Hi. They come into my office, sit on my couch, eat my candy. They text me with various questions. I just try to make myself available.

They get to see faculty in another light. We’re not just the people who stand up in front of the class and lecture—we can be fun, too.

Among the suggested roles of a faculty athletics mentor, the one listed last may be the one that encompasses Bethel’s service to students ethic: Be a big fan.

It’s a phrase that can be applied in every area of student life, not only athletics. In Student Life, we want to start everyone off on the right foot, says Aaron. Retention is our focus—making the best experience possible.

We know the first year sets the tone. We can better work with returning students when we know we’ve started them well.