About two years ago, members of the Bethel College Women’s Association were brainstorming ideas for special ways BCWA could mark the college’s 125th anniversary in 2012. 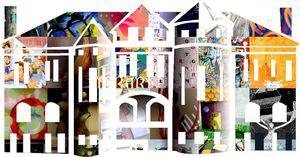 About two years ago, members of the Bethel College Women’s Association were brainstorming ideas for special ways BCWA could mark the college’s 125th anniversary in 2012.

Berneil Rupp Mueller ’62 had the germ of an idea, expressed in a cardboard model of a book – which when set upright looked like a threshing stone – that she had put together. She consulted with several Bethel alumni in the Newton-North Newton area about what a book in that format would cost to produce.

I met with Chuck Regier ’81, Bob Regier ’52  and Joel Gaeddert ’06, she says, and they had a wonderful idea, but it would have been very expensive and very labor-intensive. We looked at several different [options]. Then Susan [Bartel ’75] had this brilliant idea.

The cardboard model had 14 pieces, 28 sides, Susan says. Twenty-six pages, plus two for the cover – an alphabet book.

The book committee (Berneil and Susan, with Valerie Klaassen ’78 joining later) set to work. How could they involve a number of alumni writers in the project? What about artwork?

Eventually, the plan for a book of 26 limericks about Bethel life and lore, with illustrations by 26 different alumni artists, was born.

They put out the call for limericks. We tried to select them based on coverage of a wide range of Bethel activities, [different] years at Bethel, Bethel experiences, says Susan, the breadth of Bethel College.

After the first round of submissions, says Berneil, we still needed several letters, so we extended the contest – during which time Ami Regier ’85, professor of literary studies, hosted a limerick-writing party for students.

Then for the artwork, which Susan calls the magical part. Though they took some convincing, emeritus art faculty Bob Regier and Gail Lutsch, along with Rachel Epp Buller ’96, assistant professor of art, came up with a list of alumni artists – 26 plus an alternate for each.

However, of the first choices, only one had to decline because of schedule.

It was amazing, says Berneil. They were all very excited. The artwork has been wonderful.

Artists and writers come from the length and width of the United States and one from Canada, from East to West Coast, representing a wonderful range of ages, geography and professions, says Berneil. Class years range from 1947 to 2012.

Audra Miller, who will graduate in 2014 as a fifth-year senior, is designing the book, including the cover.

A BC ABC will launch at Fall Festival 2013, with a number of special events in the works for around that time.

We have had a lot of fun with these, says Berneil. There’s been a lot of laughing.