Bodies in our cellar

It took Bethel College more than 40 years after the play’s publication to stage "Arsenic and Old Lace", which will be on the Krehbiel Auditorium stage this spring for the third time, with real-life sisters in the roles of the murderous Brewster sisters. 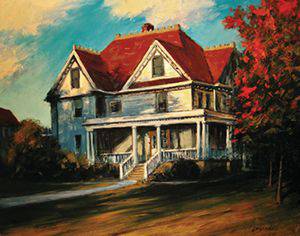 Bethel’s Goerz House likely played a key role in inspiring one of the most popular plays of the 20th century and many other works of art, like Arsenic and Old Lace by Joseph Loganbill ’80 (oil on panel, ca. 2012), recently on display in the Fine Arts Center Gallery. Photo courtesy of Joseph Loganbill

by Melanie Zuercher This school year has been one in which to mark the founding of Bethel College in 1887 and the contributions it has made to church and society since then. While it can’t be definitively proven, one of those contributions may have been helping to inspire a play that remains popular with actors and audiences to this day and which many still consider one of the funniest American works ever staged. Yet even with a solid Bethel theater tradition going back at least 50 years, there was no Bethel production of this play, Arsenic and Old Lace, until 1982, decades after it premiered.

Joseph Kesselring, an aspiring actor, took a teaching position at Bethel in 1922. He was a young man, only 20 or 21, who came from a distinguished acting family but was at a slack time in his acting career, according to Dorothy Melland, writing in the Feb. 24, 1977, edition of the Hutchinson News ahead of a production of Arsenic and Old Lace at Hutchinson’s Little Theater, March 2-6, 1977. Kesselring had ties to the Ringelman girls, sisters Elda McCann ’19 and Elma Campbell ’20 who, though they lived in Oklahoma, often visited in Newton and North Newton. Presumably it was they who told Kesselring Bethel had an opening for a voice teacher. Kesselring taught voice, which included giving private lessons and leading the men’s and women’s glee clubs, from 1922-24.

Though he was at Bethel only a short time, Kesselring made a definite impression. Dorothy Melland, the Hutchinson News writer, had an anonymous informant she called Mrs. A, who noted that Kesselring was a fine tenor who knew his music – and also definitely a ladies’ man. On the pretext of feeling a girl’s diaphragm, he would try to take liberties. He was a tall, dark and handsome fellow, Mrs. A said. He cut quite a swathe in Newton, I can tell you, but he really was a little out of place. Joseph Kesselring left Bethel in 1924 and went into vaudeville, changing his name to Joe King. He enjoyed moderate success at acting and also turned to playwriting. He authored a dozen – but the only one anyone’s heard of is Arsenic and Old Lace. It debuted on Broadway at the Fulton Theatre (later renamed the Helen Hayes Theatre),  Jan. 21, 1941.

The plot revolves around theater critic Mortimer Brew-ster’s discovery that his sweet old aunts, Abby and Martha Brewster, murder sweet, lonely old men by offering them elderberry wine laced with arsenic, strychnine and a pinch of cyanide. They believe they are helping these poor souls by hastening their passage to the Sweet Hereafter. The sisters’ equally crazy but harmless nephew, Mortimer’s brother Teddy, believes he is Teddy Roosevelt. The sisters stash their victims in the window seat until Teddy digs a grave in the Brewster basement where he buries each man, believing them to have succumbed to yellow fever while building the Panama Canal. Legend has it that Kesselring conceived the play, which he first called Bodies in Our Cellar, as a serious thriller,  but that producers Howard Lindsay and Russell Crouse convinced him to turn it into a comedy. 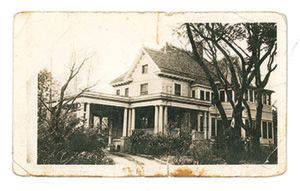 At the time Kesselring taught at Bethel, Goerz Hall (a home built in 1893 by Bethel founder David Goerz and donated to the college around 1922) was a boarding house for single male teachers. Kesselring almost certainly lived in what is now called Goerz House while he taught at Bethel. It is, says Oswald G. Wedel Professor Emeritus of History Keith Sprunger, author of Bethel College of Kansas 1887-2012, not a mansion, but a large, rambling house, built in the neo-classical style. The Hutchinson News article called it a fine old house, full of hidden nooks and crannies. Its attributes and features are myriad but two stand out in relation to Arsenic and Old Lace – the hinged-lid living room window seats and the basement. 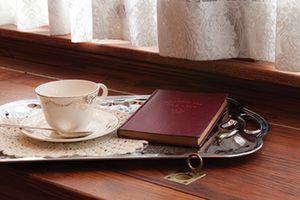 The murderous old lady plotline might have its genesis in actual events in Windsor, Conn., where, between 1910-17, Amy Archer-Gilligan took in boarders and allegedly poisoned them for their pensions. It’s widely believed that Goerz House inspired the house, itself an important cast member. As to who might have been the basis for Abby and Martha Brewster – that’s more open to debate. The first theory – and the one put forth by Mrs. A – is that the prototypes were Elda and Elma Ringelman. They would have been Joseph Kesselring’s connection to Bethel, Sprunger says. Today, Sprunger identifies the mysterious Mrs. A as Mariam (Penner) Schmidt ’25. She took music lessons from Kesselring, Sprunger says, and said the same things as Mrs. A about what it was like to be [alone] in a room with him. Mrs. A told the Hutchinson News that she was often in the house when the Goerzes lived there (and that she especially remembered the long window seats in the living room). However, three weeks after Dorothy Melland’s article came out, a letter from Kent Ruth appeared in the paper, in which he claimed the models were his mother, Abby (Ringelman) Ruth, the Ringelman girls’ aunt, and Martha (Krehbiel) Goerz, daughter-in-law of David Goerz. Disputing that claim is a Jan. 13, 1994, article by Beccy Tanner in the Wichita Eagle, titled Arsenic and Old House. It includes an interview with Francis (Goerz) Garrison ’32, Martha and Rudolph Goerz’s daughter, who says she didn’t think Kesselring would have based a character on her mother. So it remains open to speculation whether the Ringelman sisters, the Goerz family connection or someone else entirely inspired the characters of Abby and Martha Brewster.

The play and film

In 1941, there was a war raging in Europe and growing fear that America would be pulled into it. New Yorkers were looking for something to take their minds off the troubled times. Arsenic and Old Lace apparently was exactly that. The play became an immediate critical and popular success. It closed after 1,444 performances, which puts it in the top 75 longest-running Broadway shows. The opening-night review in The New York Times said it was so funny that none of us will ever forget it. Frank Capra saw the play sometime in 1941 and decided he wanted to make a movie of it, mostly because it was completely different from the films that had solidified his reputation as one of America’s most popular directors. The film version of Arsenic and Old Lace, produced in 1941 but not released until 1944, starred Cary Grant as Mortimer Brewster, the sane brother, as well as three members of the original Broadway cast: Josephine Hull as Abby Brewster, Jean Adair as Martha Brewster and John Alexander as Teddy Brewster. The film became a huge box-office success. A 1986 Broadway revival of Arsenic and Old Lace at the 46th Street Theatre in New York had familiar television faces Polly Holliday, Jean Stapleton, Tony Roberts and Abe Vigoda in the cast, and enjoyed a healthy run despite mixed reviews. The most recent celebrity revival was in Dallas in February 2011 and starred Betty Buckley and Tovah Feldshuh.

The play was first staged at Bethel in November 1982, almost 41 years after Arsenic and Old Lace made its Broadway debut. Robert Clack directed, with Arlo Kasper ’61 as set designer and Mike Claassen ’83 doing the lighting. In the starring roles: Mark E. Weaver ’84 as Mortimer Brewster, Amy Louise Friesen (Ward) ’83 as Abby Brewster, Dawn Abrahams ’84 as Martha Brewster and Lance Carrithers ’83 as Teddy Brewster. Other cast members were Mark Block ’83 as Jonathan Brewster, Janice Goering Frey ’83 as Elaine Harper, Hashim Fatehally (Kiara Windrider) ’85 as Dr. Einstein, David E. Engle ’86 as the Rev. Dr. Harper/Lt. Rooney, Tim Wall ’84 as Officer Brophy, Scott Funk ’84 as Officer Klein, Brian Roughton ’85 as Officer O’Hara and David Goertzen ’85 as Mr. Gibbs/Mr. Witherspoon. The 1982 Arsenic and Old Lace cast was a very strong one, says Sprunger, who had also seen and enjoyed the movie version. They really pulled it off well. The second Bethel production of Arsenic and Old Lace was during Fall Festival 1995, a milestone year for the event as well as a presidential inauguration year (for Doug Penner ’69). Director John McCabe-Juhnke ’78 noted at the time that he had chosen the play specifically because of how it connected to Bethel. Since it was an important year for Fall Festival, as its 25th anniversary and the inauguration of a new president, he said, we wanted to tie Bethel into the production in a big way. The 1995 cast included Chad Siebert ’98 as Mortimer Brewster, Dianna Peters (Funk) ’98 as Abby Brewster, Bryn Gribben ’96 as Martha Brewster, Matt Pankratz ’97 as Teddy Brewster, J.E. Johnson ’96 as Jonathan Brewster, Brooke Kennell (Green) ’99 as Elaine Harper and Matthew Milton ’99 as Dr. Einstein. As to why it took Bethel 40 years to stage Arsenic and Old Lace, Sprunger can only speculate. Perhaps it was seen as ‘not suitable’ for Bethel, he says. Some of the language and situations, not to mention the play’s underlying theme of serial murder, were considered quite racy for the time – in fact, Hollywood’s Production Code required changing some lines and scenes when the play became a film. Suitable or not, Joseph Kesselring’s best-known play is the main reason Goerz House is today on the National Register of Historic Places. 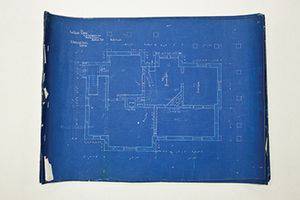 John McCabe-Juhnke takes his second turn at directing Arsenic and Old Lace for the Bethel stage (April 25-27 in Krehbiel Auditorium, at 7:30 p.m. each night). The cast for the 2013 production will have a somewhat unusual feature – actual sisters in the leading roles of the Brewster sisters. Audra and Julia Miller, seniors from Hesston, will play Martha and Abby Brewster, respectively. Fine Arts Center,  Krehbiel Auditorium Thursday, April 25, 7:30 p.m. Friday, April 26, 7:30 p.m. Saturday, April 27, 7:30 p.m.

The rest of the cast: