In spring 2012, Bethel launched the Diversity Seminar with the hope of starting conversations about culture/s on campus. 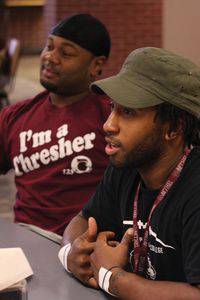 In spring 2012, Bethel launched the Diversity Seminar with the hope of starting conversations about culture/s on campus.

Three seminars and a curriculum vote later, how has the class changed Bethel—if at all?

This spring, a faculty vote made the Diversity Seminar a permanent part of the curriculum. Though it started out aimed at freshmen, the class has already evolved to being open to students in any year.

It can meet the Cross-Cultural Learning (CCL) requirement, says course instructor George Rogers III ’69. Students tend to be in athletics and can’t travel [for interterm], or afford the added expense.

The spring 2014 seminar had 20 members, all male. George co-led the course for the third time, along with a first-time Bethel instructor, Kristen Marble.

As with the first two seminars, the culminating event for this one was a convocation that the students planned and carried out near the end of spring semester.

And that was the point at which some differences from previous years became apparent.

Toward the beginning of semester, we talked about goals for the convo, Kristen says. From the beginning, the students were saying: We want this to go beyond convo, for the conversation to continue. We want something to happen over more than just an hour. They had that in mind from early on and did a good job following up.

For better or worse, the fact that there were no female students in the class meant its focus was more on issues of race, class and tradition—Mennonite tradition—and not as much on gender

A lot of the energy in convocation and afterward focused on privilege and on what students in the class’s racial minority—white—had learned during the semester.

It was interesting to see how some of the students, not just the minority ones, have jumped on this, George says. Especially with regard to privilege—folks, students in general, don’t realize they have privilege. They have power just because they are students— it brings power, an ability to act.

One thing [the white students] said: I didn’t think I had privilege just by being a white male. I have something that someone else doesn’t. They start to understand. This came through during the semester in more than just talk. One of the required field trips was to attend the 5th Annual Multicultural Greek Council (a Wichita State University organization) Step Show April 26. 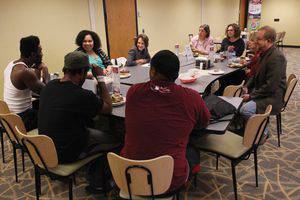 A group of students, faculty and staff meets in thevcafeteria to discuss issues of diversity on campus. Photo by Vada Snider.

They get a big dose of crosscultural learning in this class, George says. This year, we had white kids who’d never been in a minority situation, ever. They were just amazed, first at how fair the crowd was in clapping for everyone who performed—there were some mixed groups, and one Vietnamese group—and second, how they had no trouble being in that situation [as whites].

Kristen says, We heard the white students saying, Is this what my black friends experience day-to-day, of being a few among hundreds? For a couple of hours, I experienced being a minority and have an inkling what my black and Hispanic friends might feel. It was an Aha! moment that I think will stick with them.

At the same time, she adds, There are minority students at Bethel who came from large cities and had never actually been in a minority. Some in the class began to realize that they had never experienced it, either. At the end of the semester, both minority and white students said, I notice stuff so much more now.

And the noticing apparently spurred talking. After the Diversity Seminar convo, sensing the need, Kristen organized two roundtable discussions over lunch in the cafeteria.

We didn’t have a specific idea ahead of time how it would happen, she says, but after convo the conversations were already happening. So we thought, can we pull them together and have them happen in one place so sharing can occur?

What’s been fun to see is it’s not just students or just faculty or just staff, it’s the whole community coming together, who cares about this and sees it as a great potential for Bethel. Bethel can really grow in who it responds to and helps succeed. The flavor stands to be much richer.

The fact that there we’re having the dialogue is an improvement in itself, says Jean Butts ’09, who just finished her first year as resident director at Warkentin Court. We’re not just letting it go under the rug—we’re seeing where some of the issues lie behind Bethel traditions, so people can be aware of them, especially those in higher positions.

I was pretty excited to see that [at the second roundtable], almost every vice president was there, that was a step in the right direction all by itself.

In addition to her RD job, Butts also coordinates the work of the Multicultural Student Union, and honest conversation is just what she wants to see.

There have been concerns brought up in regard to these diversity conversations, that we’re trying to push viewpoints onto people, she says. We’re in no way trying to do that.

My idea is for us to share experiences with each other, to try and get others to understand: This is what happened to me. This is what I dealt with, what I’m dealing with. What’s your story?

If we have those intentional conversations, we can see the similarities and respect each other’s backgrounds, instead of always looking at the differences. Just because someone is black and someone is white doesn’t mean the white person doesn’t feel like a minority. It might not be obvious, like skin color—it might be religious. They might be Mennonite but have so much life experience that isn’t obvious, that makes them not the typical Mennonite— whatever that is. 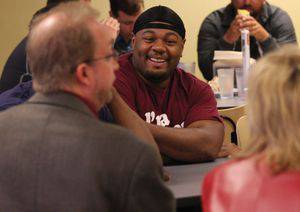 There needs to be a safe place for everybody to express their concerns. Those who aren’t in a racial minority need to feel they’re being heard as well as those who are.

My hope for MSU isn’t [that we create safe space] just for racial minorities but all across the board, whether it’s religious, LGBTQ or racial/ethnic. When it comes to diversity on campus, we focus a lot more on racial diversity but we need to be thinking of things like sexual orientation, gender roles, class and economic status as well.

Butts was pleased that the roundtable discussions happened and especially that students took ownership in seeing that they did.

There was a lot of conversation going on in the residence halls about that convocation, she says. I’ve heard some students saying that changes have to start with the higher-ups. Well, there are things students can do, too.

Butts herself grew up in Cleveland, Ohio, and went to Central Christian High School, a Mennonite school, where she lived with a host family, and then to Hesston College and Bethel College.

It seems to come down to the students in the end. Kristen recalled two of the white students in the Diversity Seminar who came in thinking, this isn’t a big deal, these issues are overtalked.

Then one of them wrote in a final paper that the first step to finding a solution is recognizing there’s a problem in the first place. I didn’t think this needed to be talked about because I hadn’t experienced it. This class needs to be required of every Bethel student.

It seems like it’s a conversation piece now, not just one convo. The Bethel Bridge [two-day special session for all students] for fall 2014 has two diversity workshops that Jean and I will be teaching. If three years of this class and conversation hadn’t been going on, I’m not sure if that would be happening.