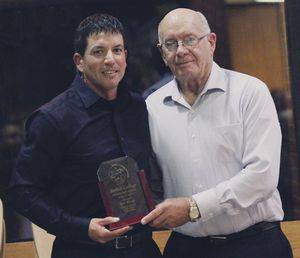 Jared Ward ’97, left, and Howard Schmidt ’63, Newton, with the award Jared received after being inducted into the Bethel Athletic Hall of Fame at Fall Festival 2014. Photo by Vada Snider.

Ward attended Bethel from 1993–98 (with one year off, 1996–97). During his time as a member of the men’s tennis team, Ward led the Threshers to three NAIA National Tournaments and earned accolades regionally and nationally.

He was named Most Valuable Player for the 1994–95 team, which has already been inducted into Bethel’s Hall of Fame.

Ward set Bethel records for most wins in four years (179), most wins at No. 1 Singles (74) and most wins at No. 1 Doubles (82). He was voted to the All-District 10 Team and is the only Bethel player ever to have earned KCAC First Team honors and been named KCAC Most Valuable Player all four years.

Since graduating from Bethel, Ward has served as head tennis professional at clubs in South Dakota and Arkansas and has earned the highest rating from the United States Professional Tennis Association (USPTA).

In 2005, Ward was named USPTA Professional of the Year. He was selected to coach the Arkansas Junior Davis Cup team 2007–11 and again in 2013. He received the Victor Sheshunoff Meritorious Education Award in 2012.

Most recently, Ward and his wife, Christy, established the Ozark Tennis Academy, which quickly became the most successful tennis academy in the state, producing more than 25 state champions.