It was late August 1963, and Dwight ’52 and LaVonne Platt of North Newton and their young family were headed back to Kansas after a summer in coastal North Carolina. 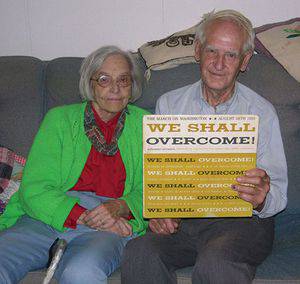 LaVonne and Dwight Platt with recording of the March on Washington, Aug. 28, 1963, which they attended. Photo by Melanie Zuercher.

But there was a stop they needed to make first.

Platt, professor emeritus of biology, had been teaching at the college for six years and was finishing PhD studies, for which he needed a marine biology course. So he, LaVonne, 4½-year-old Kamala and 1-year-old Richard had spent the summer of 1963 in Beaufort, N.C., at Duke University’s marine lab.

The Platts already had a long-standing interest in civil rights issues. Platt’s ancestors had a stop on the Underground Railroad at their Illinois home in the mid-1800s. His mother, Selma Rich Platt Johnson ’24, was very active in interracial affairs in Newton, he says. She was interested in desegregation of restaurants and theaters.

So the Platts paid attention to news reports and to material from organizations they were involved with that told of a March on Washington for Jobs and Freedom to be held Aug. 28, 1963.

What they read emphasized the importance that this march be bi-racial, Platt says. A former student of mine was living [with his family] near Washington. We called and asked if we could stay with them. So we did, and went to the March on Washington on our way back to Kansas.

The friends didn’t go, however. Like many Washington residents, they were afraid of violence or other trouble surrounding the march. They actually discouraged us from going, Platt says. Some people left Washington that day, and many businesses closed.

But he and LaVonne went ahead, with Richard in a stroller, leaving Kamala behind to play with their friends’ son, although Platt thinks she may never have quite forgiven her parents for not taking her.

We went first to the Washington Monument, where the marchers were to gather. There were people singing, to entertain the crowd, I suppose. Whenever a celebrity would show up, they would announce that, between songs. In the late morning, we started to march toward the Lincoln Memorial.

As Platt told a reporter from The Bethel Collegian about a month after the march, and as he still recalls today, he was impressed by how well-organized the march was.

They had water stations, portable toilets, first-aid stations, he says. They had their own marshals, but they were not carrying weapons. Their instructions were that if someone got violent, they were simply to surround them and call for the police.

But one lasting legacy of the March on Washington was its peacefulness.

Another thing that impressed him was such a wide variety of people, not only in the crowd but on the platform.

He adds, People think of this as ‘Martin Luther King’s March on Washington,’ but it was A. Philip Randolph’s march. He proposed it to Bayard Rustin, who wrote up a design. It was originally supposed to be three days long and include civil disobedience, but other organizers didn’t go for that.

(Randolph was president of the Brotherhood of Sleeping Car Porters, the first predominantly black labor union, and Rustin was a civil rights organizer and nonviolent strategist.)

You can see it, looking around Newton, he says. It was [once] quite a segregated community. Now it’s not a hostile, or an enforced, segregation.

Now the challenge is to change cultural attitudes. One hopes that changing the laws will change the culture. But we still see racist attitudes and more blacks [than whites] unemployed, or paid lower, more blacks in prison.

Platt’s younger sister, Zona Galle ’58 of North Newton, adds, It’s both sad and encouraging that many young people now have no idea what happened in the past—they can’t imagine such a time. I think it’s good it’s being talked about now [in the anniversary year], to remember that this was only 50 years ago.

Platt shared his memories of the March on Washington in chapel Aug. 28, 50 years later to the day, and afterward spoke to reporters from The Newton Kansan and KWCH-Channel 12 TV from Wichita.