Now in its fourth year, Bethel’s Sand Creek Community Gardens is nurturing the seeds of a new food-service initiative. 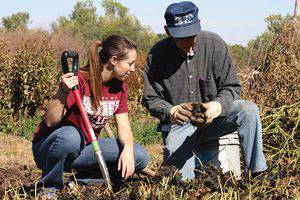 This summer, the garden had 30 plots and 23 gardening individuals or families in its new location just north of the Memorial Grove trail-head for Sand Creek Trail.

In his first year at SCCG, though not new to gardening, was Aladdin Food Service Director Nolan Corné. He grew tomatoes, several kinds of hot and sweet peppers, summer and fall squash, eggplant, Swiss chard, melons and cucumbers with the intention of serving them to Bethel cafeteria diners.

Growing these vegetables—organically, according to SCCG guidelines—is the start of what Corné imagines could be something bigger.

Meanwhile, those gardeners who have been part of the project since it began in 2010 have good things to say about the move from the original location south of Warkentin Court.

I’m positive about everything in terms of our transfer to this new garden space, says Duane Friesen ’62, Edmund G. Kaufman Professor Emeritus of Bible and Religion, who serves as the volunteer garden coordinator.

The transition has been very smooth—college maintenance staff has bent over backward to [help us, especially] Fred Unruh. He moved the shed, the sign, the bark pile and helped move the rose bushes, tilled the gardens, developed the parking lot and road, put in the drainage pipes and cleaned up the brush piles and other debris that was in the area. He has spent many hours to make the gardens a success. 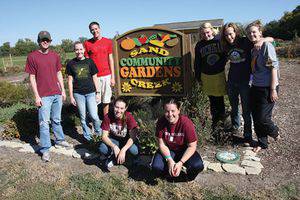 Erna Rempel is part of a new commons committee, responsible for the areas and plants that will be shared by everyone, such as the perennial garden that is front and center. Joanna [Fenton Friesen] and I did many, many hours of work, transplanting the perennial flowers, Rempel says.

Early in the summer, the Bethel College Mennonite Church youth spent a day of their service week helping with the perennial garden.

They contributed a lot with their work and enthusiasm, Rempel says. In addition to installing the limestone border, they seeded the basil and some of the annual flowers. I think some had never planted anything before, and they were really enjoying it.

Besides the flowerbed and decorative perennial plants such as two beds of knockout roses, the commons areas include vegetables, herbs and fruit.

The gardens looked better than they ever have, in the fourth year, says Friesen. We had excellent crops of potatoes, onions, green beans and watermelon.

Nolan Corné proudly served watermelon from the Aladdin plot to rave reviews at the faculty and staff First Supper Aug. 11.

Organic is the way to go, he says. It’s the way society is going. The students want organic food, but it’s expensive.

Gardening is a personal passion for him, he says, but he’s also trying to find a way to cut the cost of organic produce.

His first-year garden, though it adds something extra to cafeteria options, wasn’t big enough as is, or even if it doubles in size as Corné anticipates next year, to feed the demand.

However, looking down the road, Corné hopes to involve more students in the gardening, to make this long-term sustainable, not just a one-time thing for Bethel food service. He dreams of seeing organic gardening become part of Bethel’s curriculum.

Gardening is work, a discipline, Corné says. Being involved in the community garden is not just about food service and customer service, it’s incorporating some of my personal life into my work.

I want to offer students something they’ll take with them into their own gardens and lives, he says. I want to plant seeds in the hearts and minds of students.