It’s nothing new for Bethel students to spend part or all of the summer counseling at Camp Mennoscah near Murdock. 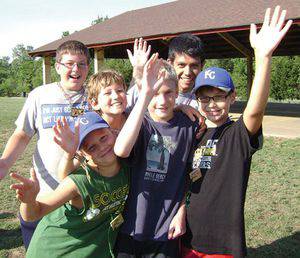 This year, though, two first-time student counselors had the added bonus of seeing a whole new side of their Bethel peers.

Current Mennoscah director Olivia Bartel ’95, who just finished her sixth year in the position, is an illustration herself of the typical Mennoscah staffer, who started as a camper and moved into counseling as a college student. Bartel became camp director in February 2008.

Camp Mennoscah has always recruited at Bethel, Bartel says, and sometimes other area colleges as well. But our ties to Bethel are strong, going back to the General Conference Mennonite Church era.

We depend on Bethel students like there’s no tomorrow—we’d really be up the creek without them, Bartel says. They are generous with their time and energy. They’re fun-loving folks who are there for the right reasons—for the campers and for what they can contribute.

This past summer, more than 50 Mennoscah counselors, including most of the summer staff, were current Bethel students or 2013 Bethel graduates—in addition to numerous alumni who served as volunteer counselors or directors of specific sessions.

One of these is Allen Jantz ’84, Bethel professor of education, who also began his Camp Mennoscah career as a college student counselor after his freshman year at Bethel in 1981 and who has been directing or co-directing one of the junior (completed grades 6–7) camps for the past 25 years.

In addition to getting many repeat counselors from his past junior camps, Jantz convinced a first-time Mennoscah counselor, senior Travon Lewis from Houston, to join his crew. 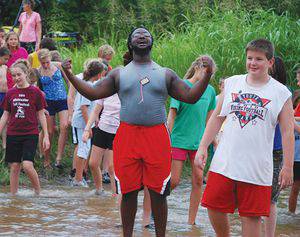 I’ve been trying to get him to come for a couple of years, Jantz says of Lewis, who is majoring in elementary education. He’s great with kids and has the perfect personality and attitude.

Lewis says he went in response to his professor’s persistence as well as for the opportunity to work with kids and the knowledge that camp counseling is good for an elementary education resume.

One of the high points of his five days at camp, he says, included one girl who called him her best friend.

It was amazing to see how in a short span of time you can have so much impact, he says. It really confirmed for me that God has called me to be a teacher.

He recalls being back in Newton and walking across the Bethel campus, then hearing someone run up behind him, calling his name. It was a camper named Eli, delighted to see Lewis and introduce other members of his family.

As a role model, you can change kids’ lives, Lewis says. They will remember you always.

First-time counselor Danny Barrera, a senior from Newton, came away with similar feelings about his contact with the campers.

I had heard lots of good stories from the guys in my mod, friends I hang out with, about being at camp, Barrera says. I thought I couldn’t go because my family was supposed to be in Mexico that week, but then we didn’t go. 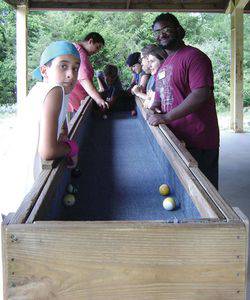 Travon Lewis, right, with Camp Mennoscah campers and a game of carpet ball.

He had heard, he says, how close you got to the kids in such a short time and found that to be true. My expectations were surpassed, he says. I was always having fun—I felt like I was having more fun than the campers, with my first time at camp.

There were things that touched me, which I had expected, but it was deeper than I expected.

He recalls making friendship bracelets and giving one to a boy named John. I thought it was just a small thing, but his eyes lit up and then he came up to me and said, Can I tell you a secret? You’re my best bud. I love you, Barrera says.

Little things can make such a big difference, he adds. This reinforced how much I like being around kids. I’m a business major and not sure where my career path will lead, but if there’s a way it can involve working with kids, I’ll go there. This also reminded me how God works through people.

In addition to having affirming contact with kids, Lewis gained a whole new insight into his fellow student counselors.

This completely changed my outlook on Mennonites, Lewis says. I come from a Southern Baptist background, [a culture] where sports, church, whatever you do, you get excited. You get happy.

When I got to Bethel, everybody was so quiet and laid back. It felt passionless—I thought, I’m outside my box, I don’t get it.

People kept telling me, You’ve got to go to Mennoscah, you’ll love it, it’ll be so good, and I thought, Yeah, right. And then when I got there, I saw a completely different side of my peers and classmates. Singing songs with the guitar, singing with the kids, praying, reading Scripture. I found the passion. It was a great spiritual experience.