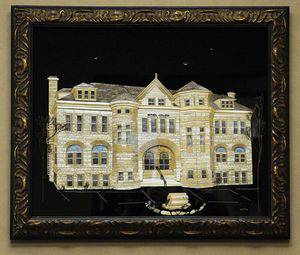 For almost 40 years, Marie and Martha Voth, Class of 1965, of North Newton, have been working together to create beautiful and intricate wheat marquetry pictures like this one of the Ad Building. Marquetry is a process of applying veneer—in this case, wheat straw—to a surface to form three-dimensional patterns or pictures.

Their pieces often depict historic buildings, such as Alexanderwohl Mennonite Church (the sisters’ home congregation), Goerz House, the Old Mill in downtown Newton or the Voth family’s 100-plus-year-old barn in McPherson County. A photo of Martha, Marie and their barn picture appeared in the Oct. 29, 2013, issue of The Hutchinson News.

Marie and Martha created this, at least their fourth wheat marquetry picture of the Ad Building, in 2012 in recognition of Bethel’s 125th anniversary.

The sisters have seen their work exhibited in several places locally, such as the Walkabout Gallery, part of the Lake Vista/Schowalter Villa complex in Hesston, and the annual juried competition, Art is Ageless, at Presbyterian Manor in Newton. This Ad Building picture, in fact, won first prize in mixed media at the 2013 show and will appear on a 2014 calendar for nationwide distribution.

Marie and Martha donated the picture to Bethel College to be used as a fund-raiser. Alumni Office and Advancement staff decided to hold an auction at Fall Festival 2013, with Wade Brubacher ’70 as auctioneer. Eunice ’50 and Willis Esau ’50, Hutchinson, had the winning bid, at $1,700.