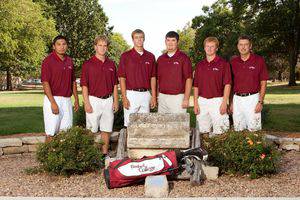 The 2011-12 golf team was named academic national champion of the National Association of Intercollegiate Athletics by the Golf Coaches Association of America. To be considered for the honor, a team must submit a GPA of 3.0 or higher (the average of the GPAs for each player on its official squad list for the academic year). Bethel was the only school from either the Kansas Collegiate Athletic Conference or the region to be named to the 2011-12 GCAA list.

Earlier this year, Aaron Rudeen, senior from Osage City, had his research poster, Detection of peptidyl-4-hydroxyproline in Bacillus anthracis, accepted at the Midwest Regional Meeting of the American Chemical Society, Oct. 24-26 in Omaha. At the conference, Aaron received the award for outstanding undergraduate poster, out of 94 presented.

For the fifth year in a row, Bethel is the only private, liberal arts college in Kansas and one of only four institutions of higher learning in the state to be ranked in Forbes.com’s analysis of top U.S. colleges and universities.

In its second year to be listed in the Washington Monthly college rankings, Bethel vaulted to the top of its category, sitting at No. 4 among Best Baccalaureate Colleges 2012-13. 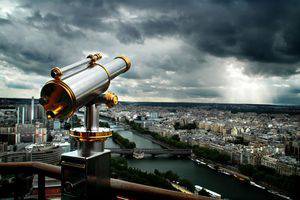 A photo by Audra Miller, senior from Hesston, won a first prize and was runner-up for Best in Show in the Professional Arts/Photography category at the Kansas State Fair. Miller took her prizewinning photo, Parisian Outlook, from the top of the Eiffel Tower following a Bethel College trip Italy in May 2011, when she and several friends traveled to France on their way home.

For the second year, Bethel is in the Top 20 Best Regional Colleges-Midwest, at No. 18 in the U.S. News & World Report 2013 edition of Best Colleges. 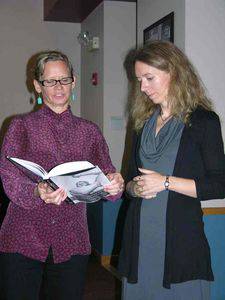 Rachel Epp Buller ’96, assistant professor of art, celebrated a book publication this fall. She edited Reconciling Art and Mothering (Ashgate, 2012) in which she, 22 other women and one man examine the myriad issues raised by the tension – both positive and negative – between mothering and art. 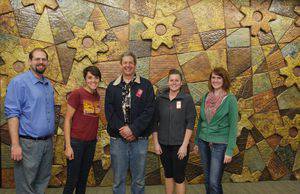 Conrad Snider ‘84, center, stands in front of the mural he created for the newly renovated James A. Will Family Academic Center

Conrad Snider ‘84, center, stands in front of the mural he created for the newly renovated James A. Will Family Academic Center, which opened for classes this fall and was dedicated at Fall Festival in October. The mural was a commission from the Class of 2008, and Snider is surrounded by four class members, from left: Parker Stanley, Wichita, Kimberly Schmidt, Kansas City, Mo., Chelsea Hahn, Lenexa, and Jill (Swenson) Robb, Moundridge. The piece is located in the building’s main entry area, through the west doors. It is composed of about 180 ceramic tiles – representing about two tons of clay – and is 15½ feet wide and almost 9½ feet tall. At the mural dedication, Snider said of the main motif, the threshing stone: [It] is a tool that [helped provide] nourishment for the body. A school like Bethel provides nourishment for the mind and soul.