Jost had a lifelong love affair with music 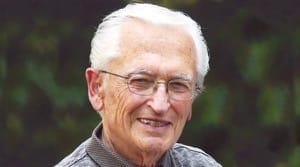 Growing up on a farm near Hillsboro, Jost began to show an ability and passion for music at an early age. This continued throughout his life. He graduated from Hillsboro High School in 1945, and from Bethel College, where he focused on piano and voice, in 1949.

Jost earned a master’s degree at what is now Wichita State University. His first teaching position was at Freeman (South Dakota) Junior College, where he met fellow faculty member Mary Ann Heiser. They were married Aug. 12, 1960.

After seven years teaching in Freeman, Jost began doctoral studies at the University of Southern California in Los Angeles. Upon completion of coursework in 1960, he began his 32-year teaching career at Bethel College. He earned his Doctor of Musical Arts degree in 1966.

The Josts are the parents of two children, who also went on to Bethel College and who are both visual artists: Scott Jost ’85, Harrisonburg, Virginia, and Lora Jost ’88, Lawrence.

Family was an important priority—Jost maintained an active interest in and support for his children, their spouses and his grandchildren until his death.

In addition to his teaching responsibilities, he directed church and community choirs and served as a frequent guest conductor, clinician, adjudicator and workshop leader.

Upon retirement in 1992, Jost continued his love affair with music. He kept directing church and community choirs, listening to music and playing the piano.

He and Mary Ann visited a number of places throughout the country and enjoyed many Kansas day trips. He delivered Meals on Wheels, and chaired the Life Enrichment Committee at Bethel for 17 years.

In later years, as his hearing deteriorated, Jost was no longer able to enjoy playing or listening to music, and visiting with friends became difficult. He was forced to “reinvent” himself, and began to read much more widely, maintaining a lifelong interest in world events. He followed the careers of his many former students with much interest.