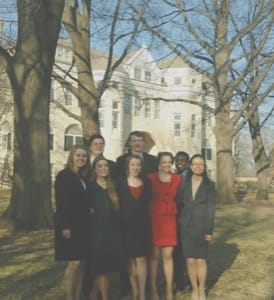 At the former, Bethel finished first for the day. By the end of the latter, all eight members of the squad had qualified to the American Forensic Association National Individual Events Tournament (AFA-NIET), April 2-4 at the University of Florida, Gainesville.

Sophomore Kendra Gonzales was the tournament champion in Program of Oral Interpretation, which gave her what she needed to qualify that event for AFA-NIET.

Two freshmen, Candy Dao and Emily Kondziola, each brought home state championships as well, in Poetry Interpretation and Impromptu Speaking, respectively. They also qualified those events to AFA-NIET, the second for each.

Freshman Heather Chaney, sophomore Shekhinah Jones and junior Jacob Miller comprised half of the six finalists in Persuasive Speaking. The one-two finishers in that event at KASIE go on to represent the state of Kansas at the Interstate Oratory (IO) Tournament.

IO is the oldest competitive speech tournament in the nation. It will be held this year at the University of Nebraska-Omaha. Miller represented Bethel—and Kansas—at last year’s IO Tournament.

In the end, Jones finished 2nd behind K-State’s Jesse Porter and will go to the IO Tournament in late April.

Although Bethel earned the most points, giving it the first-place finish at KASIE, it’s not accurate “to say we’re ‘state champions,’” said Marsh. “Bethel, K-State and HCC don’t compete in events that we’ve already qualified [for nationals], except in the case of Persuasive Speaking, because that final round’s results determine the IO Tournament qualifiers from our state.”

“[KASIE] was particularly rewarding,” said Marsh, “because every single team member competed in at least one final round and the entire team competed together for the first time since the season began last fall.”

A week later, Bethel went to the Battle for the Capital Swing Tournament in Lincoln, Nebraska, finishing second out of 12 teams on Day 1 and third out of 12 on Day 2. Miller qualified two more events to AFA-NIET and Unruh qualified his first of the year.

Finally, at the District III Tournament, junior Autumn Masters qualified two events and freshman Heather Chaney one, with Unruh adding two more and Gonzales one. For AFA-NIET, Miller had five events, Unruh and Jones three each, Masters, Gonzales, Dao and Kondziola two each, and Chaney one.

“This was a particularly rewarding regular season,” said Marsh, “because even though we have a relatively young squad, the team managed to qualify every member to the AFA-NIET. Additionally, this team qualified more events for the National Tournament than Bethel has had in at least the last decade.” Her records go back to 2005.

The team presented a “Night Before Nationals” Showcase to the public March 29 in Krehbiel Auditorium.