A place at the table

For nearly 30 years, Jerry and Delora Decker have been extending their generous hospitality to students, helping make home feel not quite so far away. 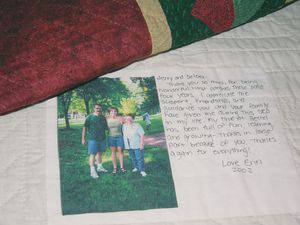 Erin Huebert ’02 gave this quilt, made by her mother, Sheila Huebert, as a gift of appreciation to her host parents, Delora and Jerry Decker

Delora ’63 and Jerry Decker took to heart the care for others they saw modeled, which dozens of Bethel students look back on with gratitude.

Take Susan Peschel Deraney ’97, a native of Maryville now living in Detroit Lakes, Minnesota. She spent her first year at Kansas State University, and then Marty Ward, former Bethel tennis coach, recruited her to play tennis and continue her studies.

When I transferred to Bethel my sophomore year, I lived in the dorms and became friends with Anne Reiman [Montera] ’97, Susan says. She was also a sophomore and had already been placed with Jerry and Delora. She introduced me to them, and they were so kind and sort of adopted me as a student away from home, even though I was from Kansas and not placed with a host family. 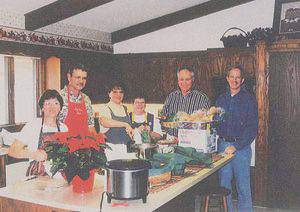 From left, Judy Kliewer, Jerry Decker, Nancy (Juhnke) Stucky ’71, Delora Decker, Dave Stucky ’71 and Dave Linscheid ’75, director of alumni relations, ca. 2001, on one of the first occasions that the Alumni Council made a holiday feast for members of the Student Alumni Association at the Deckers’ home.

Anne, who grew up in Englewood, Colorado, and now lives in Eagle, Colorado, was recruited to play volleyball.

I was the only out-of-state player on the team, she remembers. The coaches, Liz Darnigan and Bev Mayer ’88, connected me with Jerry and Delora, because I was interested in a family away from home.

They contacted me before school even started. They met us when we drove up to campus and my parents stayed at their house for the night. They took us in as if we were family.

They came to almost 100 percent of my games—they were always there to support me, she goes on, and also notes, If I had been their actual daughter, I would have been related to almost everyone on the court. 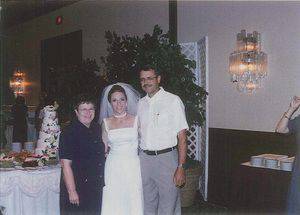 Delora and Jerry Decker with Susan Peschel Deraney on her wedding day, Aug. 19, 2000.

Another time the Deckers took in two students at once was when those two came as a married couple.

Brian ’98 and Emily Kynaston ’97, now of McPherson, transferred to Bethel from Snow College in Ephraim, Utah. Both were athletes and we liked the idea of continuing our athletic endeavors while attending a school with such an amazing academic reputation, Emily says.

After prayerful consideration, the two of us decided to pack our bags, load the U-Haul, travel about 1,000 miles and begin a new adventure together. Brian played football one season and soccer another season. I played both basketball and soccer the two years I was completing my bachelor’s degree.

The Kynastons hadn’t been at Bethel long when they met the Deckers. They provided us an instant support system and made us always feel welcomed, loved and part of their family, Emily says.

When we moved to Kansas, Brian and I were young newlyweds—I was 20, he was 22. We had been married a little over six months and both had just two years of college under our belts.

Delora and Jerry fed us dinner more times than I can count, and made us home-made ice cream and brownies. I remember seeing them at our ball games and always feeling at home in their presence. They were the closest thing to parents that Brian and I had within the state of Kansas during our Bethel years.

Home away from home, for years to come 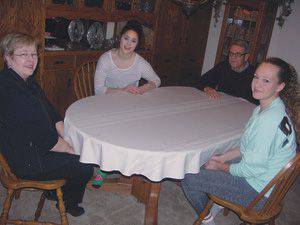 Delora and Jerry Decker visit with Bethel students Sami Strauss and Amanda Ramsden before watching the Oscars together this past Feb. 22.

Although Susan was a Kansan, I did not know much about Bethel or the Newton area when I transferred, she says. I am not Mennonite, so learning about Mennonites and their beliefs was all new to me. Delora and Jerry treated me as if I was their own.

It was such a wonderful feeling knowing that if I had car trouble, was sick or had any kind of issue, they would be there for me. Not only am I grateful for having Jerry and Delora in my life—so are my parents. It was comforting to them to know that Jerry and Delora would do anything for me if I needed them while I was in college.

Besides the countless games Delora and Jerry have been to over the years, there have been graduations and weddings, including Susan’s and Anne’s (Anne calls them her honorary parents at that event, where two of the Decker grandchildren served as flower girl and ring bearer). 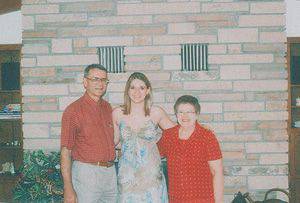 Jerry and Delora Decker with Lauren Novess Artaz, one of many Bethel students they befriended through Bethel’s Host Family Program, at Lauren’s graduation reception in May 2007.

There are so many wonderful memories, I don’t even know where to start, Susan says. One thing I really enjoyed was Sunday evenings when they would have college students come over for a meal and fellowship. They were so kind to always open their home up to us young adults. That meant a lot and was a big commitment for them.

Jerry and Delora played a pivotal role in helping us create a new home, says Emily. We knew that we had friends and mentors we could count on.

The Deckers still hear from many of the students they have hosted over the years—Christmas cards, pictures of children, phone calls.

We always say: You’re at home here, Jerry says. A comment I’ll never forget was It’s great to be in a home—I haven’t been in one since I came to Bethel. That was Jeff Thomas [’90]. 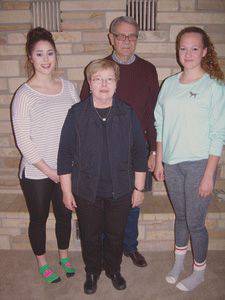 Jerry and Delora began hosting a new student, Sami Strauss (left), at the start of the 2014–15 school year. This Feb. 22, Sami and her roommate, Amanda Ramsden (right), came over to the Deckers’ to spend the evening watching the Academy Awards.

Though the memories of Susan, Anne and the Kynastons are from 20 years ago, Delora and Jerry have carried the tradition forward to another generation of students who find themselves in the middle of Kansas, far away from homes and families.

Jerry and Delora’s current student is Sami Strauss, in her first year at Bethel and coming from Aztec, New Mexico. As often as not, Sami brings along her roommate, Amanda Ramsden of Coquitlam, British Columbia, when she visits. The Deckers have also developed a friendship with Grace Bradfield, a sophomore from Derby.

I asked them, What’s been the most surprising thing to you about being at Bethel? Both Sami and Amanda said it was the friendliness of people, how everyone smiles and says hello.

Helping enhance the sense of home for some Bethel students can certainly be credited to Jerry and Delora Decker. And they also benefit from the experience.

We’re really the ones who’ve been blessed, Delora says, through relationships, friendships and learning about other cultures. Also by seeing so many wonderful people in the community willing to host, and being able to mentor and encourage others. Carol [’69] and Ron Peters [’67] told us once, You’ve given us a chance, too.