What it means to be useful

Rachel Kasper Fitzsimons ’88 and Arthur W. Marks ’93 were on campus for several days in early May to be part of the 125th anniversary “Masterworks” choral event. 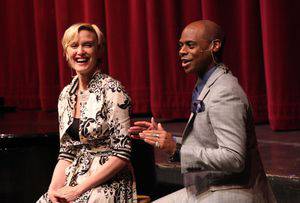 While here, they did a special convocation in which they reflected on performing and each presented several music theater numbers.

I grew up, literally, on this [Krehbiel Auditorium] stage. My mother [Kathryn Dick Kasper ’62] was the resident director at Haury Hall when I was born, so I lived there for the first several years of my life. I grew up performing. My father [Arlo Kasper ’61] was the head of the theater department here. In fact, he was the first full-time theater professor at a Mennonite college in North America. He opened this theater. And my mom was a voice teacher. They currently are living in [Asunción, Paraguay], running an opera company and teaching.

I grew up performing, but in an academic, ivory tower arena, with that perspective of the purity of theater for theater’s sake. For me, making the transition to being a professional actress has had some difficulties in terms of my Mennonite upbringing.

My grandmother, my mother’s mother, Helene Wiens Dick, was the daughter of a Mennonite minister, the wife of a Mennonite minister. Every birthday card, every Christmas card, every note I ever got from her, was signed: Be useful. … It was part of my identity my entire life, that we are meant, as Mennonites [to be] part of the community. It’s not all about us, it’s about serving the community, the greater good, serving God.

I’ve had some difficulties over the years, justifying at different points whether what I do is actually useful. I went through a real period of angst when I was about 26. My career was not going the way I really wanted it to, either, but I decided I had to go back and get a teaching degree because the performing, I felt, was all about me.

When you’re a performer, your product is yourself. There is nothing outside yourself that you’re marketing. … And that feels strange at times. …

So I decided I was going back to school. And I happened to see my grandmother, who lived in Illinois. I told her, Grandma, you raised me to believe (she never said this specifically but the impression I got) that the most valuable professions were missionaries, nurses and teachers – all very selfless, all very underpaid professions. I sometimes feel like I’m not doing anything that’s useful to anyone but myself.

She looked at me, and she said, Oh, don’t ever think that. What you do, you help us access our emotions. We’re not always very good at accessing our own emotions. …

She said, Your father has convinced me over the years that drama is very useful in helping us look at our own lives, and to think about life in a different way, and to feel, which we’re not very good at doing.

I left there, and I said, OK, I guess I’m going to perform. That’s what I’m supposed to do, and my grandma has given me the stamp of approval. …

I am a storyteller. … I believe the purpose of my career is to tell stories, and to make people feel – maybe think, but more importantly feel. … That’s what I do.

In many ways, Rachel and I have a similar story, with a grandmother who was very influential in her pursuing of this career. Mine was, as well. I come from a very musical family. … Music was always a part of my existence. My mother was a former opera singer [who] got her start in the classical world [and] was one who pushed the boundaries.

We were taught: You will go to church and you will be the great singer. That’s your gift. That’s where you will be. I grew up in the church, singing. It was great – I learned a lot about what my voice can do. But I also learned from my mother what the professional world was like.

I was really in awe of how she maneuvered and handled the stress of dealing with  … the crazy, professional world of classical performing. … I would sit sometimes and watch her perform, and I was so curious how she could deal with so many people’s crazy – in my mind – interpretations of how they thought things should be. There were a lot of divos and divas, and my mom wasn’t one of those.

[I said to her,] You’re doing the same thing, but you don’t act like they do. What’s the deal?

[She said,] There’s a reason for that. Your grandmother set me down, early in my career, and said: ‘If you’re going to pursue this, you can never lose sight of being true to oneself, meaning that you must stay within what you have been brought up to do. You know how to treat people right. You want people to treat you with respect – you treat them with respect. If they don’t, it’s OK, but you never lose yourself.’ …

I learned early on [from my grandmother] that it was important not only to have such gifts, but that the gifts do not define who you are. The gifts are part of who you are, and they allow you to express what you’re feeling, how you’re feeling, and also give you the opportunity to touch someone else.

A couple of years ago, I did the 30th-anniversary tour of Ain’t Misbehavin’ … . Richard Malpy [the original director] surprised us at a production we were doing in Boston and he just showed up. He came to me backstage and said, Can I talk to you in your dressing room?

He sat down and he said, I want you to know I watched you for the last two nights. You didn’t know I was here but I was watching you backstage and at the stage door. One thing that caught my attention and really made an impression on me is that you stood there for an hour and 45 minutes each night, talking to the people that came to the show, that wanted you to sign their playbill, wanted you to hear their story of why they love Ain’t Misbehavin’ so much and why they appreciate what you do. You took the time to touch their lives. …

And I thought: Grandma was on her J-O-B. She put some knowledge on me. It comes around so often – I was steered in a wonderful direction. I got a great foundation.

The older I get, the more I realize that what I do – what we do – is give people an opportunity to escape sometimes, tap into their emotions that they may not feel comfortable tapping into, that may be too difficult. It starts a lot of conversations that might be a little harder had they not sat through a production. … I’m very happy and proud that I’m able to do that. …

I was a social work major here at Bethel. I find, more and more, as I direct and choreograph pieces, now as I get older, that I use a lot of my social work skills in handling different crises that may come up during the course of a production. A lot of those tools that I learned are what I do in my performing and musical theater life as well. It’s really quite extraordinary.

That’s the beauty of what we do. It’s all about that circle of life (a little Lion King). It’s about sharing and continuing to grow.

When I stop getting nervous and excited and anxious about performing, then it’s time for me to step away. The reason is, I want what I do to not only matter to my audience but also to keep the meaning for myself, keep reminding myself that what I do is important and that it has a place in our society.

Young performers often come up to me and say, Did you go to a conservatory? I did, for part of my junior year – I went to an acting conservatory, but the rest of my education was this liberal arts education.

And [they] say, Well, should I go to a conservatory? Should I go to college at all? Should I just go straight to New York and audition? That’s a very individual choice … I end up saying to them, I am really, really glad I went to a liberal arts college, if for no other reason than I use the disparate knowledge that I have – from all the different classes that I had to take – as an actress.

The last character I played on Broadway was French. I studied French here at Bethel, and at Newton High School. I was able to draw on skills that are not taught in a conservatory setting. I’ve used so many different things. And I feel like I have a broader knowledge of the world than a lot of people who went to conservatories.

Yes, I did not come out with the connections in New York or Los Angeles that you do if you go to a conservatory. But if you have the connections and no talent to back it up, it doesn’t really do you any good – or any ability to grow as an artist. …

That doesn’t mean don’t go to a grad school to deepen your knowledge in one arena, but use the fact that you have a broad base of knowledge of the world in your performing. It will, if you allow it to, come in handy.