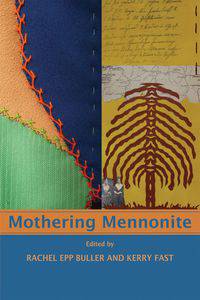 That energy has resulted in a good bit of publication including, most recently, two books of essays with mother in the title.

Epp Buller, assistant professor of art, and Kerry Fast, a freelance editor, writer and researcher from Toronto, compiled, edited and co-wrote the introduction for the 16 essays that make up the latest, Mothering Mennonite, released at the end of May by Demeter Press of Toronto.

I proposed the book to Demeter, which publishes books pretty much exclusively related to motherhood, in many disciplines, says Epp Buller. I was looking for someone to collaborate with who had more of a background in Mennonite studies. Demeter is a Canadian press and they wanted a balance of Canadian with non-Canadian writers.

She and Fast had never met (and still haven’t, face-to-face) but a colleague put them in touch. Fast has a doctorate from the University of Toronto and her primary research interest is conservative colony Mennonites in Latin America, their migrations to Canada and the effect on their religious lives.

She and Fast put out their call for papers through Facebook, Goshen (Ind.) College’s Center for Mennonite Writing, Mennonite periodicals and other networks.

Jennifer Chappell-Deckert ’96, adjunct faculty in the social work department, recently returned to Kansas after three years with her family with Mennonite Central Committee in Colombia.

I saw the call for papers two different times before Rachel e-mailed me and asked if I would consider [submitting an essay]. I had kind of ignored it, because I was overseas and too busy, but it was an area I was really interested in and have been for years.

I wanted to write but I wasn’t in a space [while in Colombia] where I could do it from my own perspective. What could I write about from the Colombian experience? My essay on the mothers I worked with in that context.

Chappell-Deckert worked on a project initiated by the Teusaquillo Mennonite Church in Bogotá through which she listened to the stories of women who had suffered deep trauma as a result of Colombia’s decades of social violence and armed conflict.

I finally decided to send in a proposal based on my work with listening and the church community I worked with. Most of the people the church served were single mothers who were using a faith perspective in how they raised children and coped with trauma. I thought that might be an interesting bent on the topic.

Chappell-Deckert’s essay is titled From Persecution to Hope: Mennonite Mothering in the Context of Violence and it falls in the book section called Mothering In and Around Culture(s).

Was it hard to write? Yes and no, Chappell-Deckert says. The work I was doing was difficult – collecting stories of trauma and human rights violations – but writing was almost therapeutic because the mothers who gave their consent were really excited that I wanted to share their stories.

Most of my [work with the church project was] about what was wrong. This was more about how do you help hope grow, how do you shape it for transformation for the community. These conversations were more positive and hopeful.

It came from a paper for a Gender and Communication class at the University of Kansas, in which she looked at infertility experiences. Two of my professors told me I needed to look into autoethnography, for which the short [explanation] is that it incorporates the researcher as a component of the research, she says.

The essay tells of her experience of infertility within different Mennonite contexts. [My husband’s] perspective is also in there. He didn’t write, but he had a lot to do with it.

Because of the lack of attention to infertility in Mennonite contexts, she continues, I explore the topic using autoethnography, an autobiographical research method that involves ‘writing about the personal and its relationship to culture’ [to quote one scholar].

Like Chappell-Deckert, Crouse-Dick found the writing cathartic – and also really scary, putting that out there, not only divulging this very personal information but also wondering how people will respond. It was gratifying to try.

This was something we saw in almost all the essays, says Epp Buller. They incorporate both scholarly and narrative components. Because this is such a personal topic, you almost have to have that.

Other sections of the books are Picturing Mothers and Daughters and Mothering Across Generations. The writers are about half Canadian, half U.S., and include several men. One other Mennonite faculty member, Kirsten Beachy of Eastern Mennonite University, has an essay, while the other writers are not from Mennonite educational institutions.

Crouse-Dick notes that hers is not the only essay related to not being a mother (others look at singleness and intentional childlessness) while Chappell-Deckert says, Mine is more about how the church mothers and less about actually being a mother. What do we do as a Mennonite community to mother people who are hurt and broken? It’s about mothering as reconciliation.

While the book is now available for order from Demeter Press (see www.demeterpress.org/motheringmennonite.html) and will be for sale in select local bookstores (for example, Bethel College’s bookstore and the independent bookstore Pages in downtown Newton), there will be several events marking its publication in different locales over the next several months.

Since Marlene Epp, associate professor of peace and conflict studies at Conrad Grebel University College, Waterloo, Ontario, is coming to Bethel in late October to give the 2013 Menno Simons Lectures, Epp Buller, Chappell-Deckert and Crouse-Dick are organizing a symposium they hope will carry on the conversation started with Mothering Mennonite.

Marlene Epp is a groundbreaking scholar and the first to write about Mennonite women and gender in [the context of] Mennonite history, Epp Buller says. Many of the essays in ‘Mothering Mennonite’ refer to her work.

Epp will attend the symposium, scheduled for Saturday, Oct. 26 at Bethel. It will include panel presentations, lectures and displays of creative work that represent inquiries into Mennonite mothering.

This intersection of gender and religion offers many possibilities for engagement, says Epp Buller. We hope to build upon the book’s foundation to offer even broader understandings of Mennonite mothering through the symposium, including nonviolent mothering; foster and adoptive mothering; infertility and child loss; mothering in the mission field and in relief, development and social justice work; and religious expectations of mothers, among others.