Reimer puts her dream of peace into special stage production 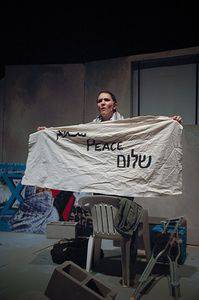 On Feb. 1, she staged the one-woman play My Name is Rachel Corrie in Krehbiel Auditorium.

However, it really started two years ago, after another interterm experience in 2011. As a sophomore, Reimer was part of the Jerusalem Seminar that Professor of Bible and Religion Patty Shelly ’76 offers every other January.

Reimer had wanted to go to Africa, she says – but her mother, Rosie Epp, strongly encouraged her to take the Jerusalem Seminar instead. Epp, a pastor, had gone on the trip about a decade earlier.

The Jerusalem Seminar was a pivotal experience for Reimer.

Being [in Israel/Palestine] for three weeks really opened my eyes to a different view on the world, she says. I saw the conflict up close and was able to decide for myself how I felt about it, rather than having the media shape my opinion. 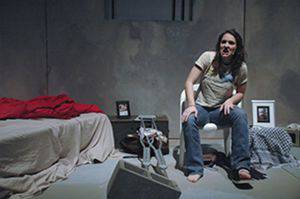 All the Bethel students returned from that trip determined  to take some kind of action in support of Palestinians and nonviolent peace activism in the region. They organized several public events on campus.

Also at about that time, Upton-Tyner gave Reimer a copy of the script for My Name is Rachel Corrie.

It is based on the journals and e-mail messages of an American college student who, as a member of the International  Solidarity Movement, traveled to the Gaza Strip in 2003. On March 16 of that year, she was killed after being run over by  an armored bulldozer operated by the Israeli Defense Forces.

Corrie was trying to prevent a Palestinian home from being demolished. She was less than a month shy of her 24th birthday.

British actor Alan Rickman and journalist Katharine Viner edited Corrie’s writings into the play. Rickman directed the first production in London in 2005. The play was controversial in the United States for its political content. 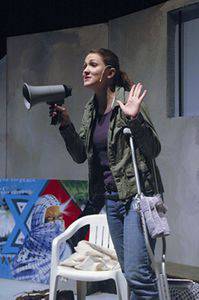 I recognized [Rachel’s] name from hearing some people in Palestine mention her, Reimer says. I sat down and read the play straight through, like a book. Then I read it again. Then I said to Megan, ‘We have to do this.’

I thought about it all summer, and came back and told Megan again, ‘We really have to do this.’ With the logistics, and the things we were both involved in, it took until now.

I’ll never forget when Renee came back from Jerusalem after her interterm trip, says Upton-Tyner. She sat in my office and we talked about her experience for over an hour. It is so moving to see a young person have an experience that changes them completely, and that trip did.

The things that she was reflecting on, what I heard her saying, reminded me of Rachel Corrie’s voice in the play – holding that tension of having seen things, and then coming back to such privilege. These are the same things that Corrie writes about.

She gave Reimer the script, she says, because at first I thought perhaps reading the play would offer comfort, perhaps even some closure. I think it did the opposite. She came back the next day determined to produce the play at Bethel. 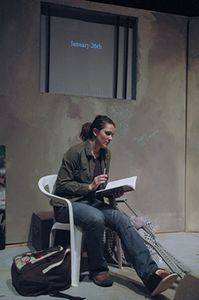 I was skeptical. She had no idea how much work it would be, over 90 minutes of one person speaking. The entire show rests on one actress. But that didn’t matter. She insisted that these words needed to be heard. As a teacher, how can you say no to that?

Staging the play was an independent study for Reimer. To help fulfill some of her requirements, she kept a blog during January as a way to reflect on the process and share it with others.

I knew it would have a lot of emotion for me, she says. I wanted to share what was happening and what I was thinking with people in my church [Sermon on the Mount Mennonite Church, Sioux Falls] and other friends who aren’t here.

One issue that made a big impression on Reimer and which Corrie also mentions frequently is water-use restriction. She was appalled, she says, to see how only Palestinian areas were deprived of water in Israel/Palestine.

She decided to try and live on a gallon of water a day for five days. It was hard, but it was a good experience, she says. It really opened my eyes to how much I use and how little I really need.

Reimer spent mornings with Upton-Tyner rehearsing and blocking, and afternoons building the set and working on other technical aspects.

It [was] a movable set, so we [could] take it with us – not super high-tech, but it works, she says.

The set was also the source of added complication when it fell on Reimer Jan. 19 while she was working on it, breaking her ankle. 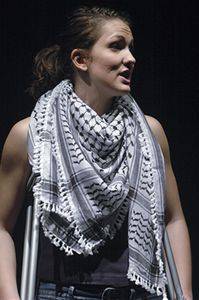 The show went on, with Reimer managing her boot cast for the entire 90 minutes, using crutches only to enter and exit the stage.

A music education major, Reimer still has three semesters of study left to complete her degree, but plans to explore service options in Israel/Palestine after graduation in 2014.

As for her production of My Name is Rachel Corrie, she says her realistic hope for the play at Bethel was that people will learn some things they didn’t know and then talk about that with their families and friends and Sunday school classes.

Her high hope, maybe unrealistic, she says, is that people will say, after they see the play, ‘We’re going to do something, make a difference – I’m going to contact my senator or the governor, take some kind of action.’

The Feb. 1 performance had free admission but people were invited to make donations. Everything above expenses was designated for the Israeli Committee Against Home Demolitions. The play raised more than $1,000 for ICAHD.

It also sparked Leah Bartel, senior from Golden, Colo., to organize a letter-writing party Feb. 19 that resulted in 30 letters to President Obama and members of Congress urging them to reexamine U.S. military aid to Israel.

And the show still goes on. Reimer and Upton-Tyner will be taking it to the Mennonite Church USA convention in Phoenix this July.

Reimer says she wants to try and give a firsthand look at what the situation is like [in Israel/Palestine]. You can never really understand what is going on over there unless you’ve been there, and even then you only understand a faction of it.

I have a lifelong dream of world peace. This is one way I hope to plant seeds of peace in people and get them motivated to talk about peace and to take action. I can’t do this whole peace thing alone.