After 100 years in the making, the National Museum of African American History and Culture opened to great fanfare in Washington, D.C., and in diverse locations around the country, including Bethel College. 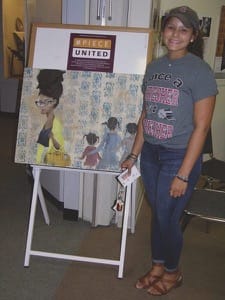 President Barack Obama cut the ribbon on opening day, Sept. 24, on the National Mall. In addition, any public library, school or museum in the United States could apply to host a set of posters that give an overview of the new museum—what it contains, how it’s organized, where it sits on the mall and how the building looks.

“There are 35,000 museums in this country,” said Annette LeZotte, director of Bethel’s Kauffman Museum, “plus the colleges, libraries, schools and so on. Kauffman Museum was one of only 67 sites chosen to host the poster display.”

One of the reasons she believes Kauffman Museum’s proposal to host the poster exhibit was successful, she said, was the museum’s willingness and ability to plan and carry out related programs.

Students were asked to share “a piece” of African-American history or culture that has a personal meaning to them, and about 20 of them did.