Professor goes back to high school

Allen Jantz ’84, professor of education, decided the best way to do his job was to go back to school. 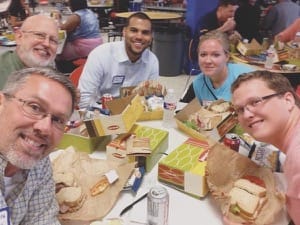 When Jantz, the chair of Bethel’s teacher education department, was granted a sabbatical in 2015, he decided to make it nine months long and to re-enter the classroom—but not as a teacher teaching other teachers. Jantz applied and was hired at Southeast High School in Wichita to teach math for the 2015-16 school year.

“It made such good sense to me pedagogically to go back into the classroom,” he says. “Sometimes prospective students or parents will ask me when is the last time I’ve been in the classroom.

“It started to be a credibility issue—I didn’t think I was relevant any more.”

He continues, “If I want to keep doing this, teaching college students to be teachers, this seemed the best way [to move forward]. A sabbatical is supposed to be for scholarship and rejuvenation. This may have been less scholarly but it was more relevant to my job here at Bethel.”

Though it wasn’t his goal, he ended up as a high-school math teacher almost where he started 31 years earlier.

He had been thinking for a number of years about taking a year to teach high school as a way to re-educate himself, he says. As the time for his sabbatical came closer, he audited Math Methods, a Bethel class for math teaching majors, “to [update] my pedagogical content and knowledge.”

“I got my credentials up and running,” he says. “I went to the annual Teacher Interview Day in March [2015]. I did all the things our graduates do to get a job.

“Then I had some of the same dilemmas they have. I applied in the Hutch, McPherson, Newton, Hesston and Wichita districts. I went to the interview at Southeast, and I had others lined up, but the HR person from Southeast called me that evening to offer me the job. I liked the vibe at Southeast—I taught there 27 years ago.”

Jantz returned to the same building he’d come to originally as a young teacher (his second teaching job, after four years at Hugoton). But almost everything else was different.

“One of the biggest changes is the use of technology, which went from nonexistent 27 years ago,” he says.

“The math curriculum, called AgileMind®, was electronic—there were no books. It’s designed for all students to have laptops, which they didn’t have, so we used worksheets. I had to plan ahead, to send in orders to get the worksheets printed. And the district told us what units we would teach, in what order.”

Another big change was in student demographics.

“When I was at Southeast 27 years ago, it was affluent kids, pretty much white, who went there,” Jantz says. “At some point, redistricting made it into a high-poverty school, and racially diverse.

“If America is becoming a non-majority country, with no majority of any race, Southeast is already there. It’s roughly 29 percent African American, 26 percent Hispanic, 22 percent white. It’s pretty much evenly split between male and female. About 22 percent are ELL [English-language learner] students. The ‘poverty level,’ measured by the number of free and reduced lunches, is 74 percent.”

Jantz wrote about many of his experiences, and his observations of what had changed, in a blog he called “There and Back Again 101.”

Lessons from the field

Back in his Bethel classroom, Jantz has been reflecting on the previous year’s lessons.

“The first thing I’ve noticed is in my instruction,” he says. “In my relationship with students, especially the student teachers, I see them seeing me as someone who actually knows what he’s talking about.

“Now I can come with examples: ‘Last year, this happened to me...’ I have credibility because I have knowledge about what they’re going through.

“Beyond that, I have current stories I can infuse to help bring concepts alive. When we’re talking in class about the educational theorists Vygotsky and Piaget, I can pull concrete examples—bring the content alive.”

The second major change is in how he evaluates students and student teachers, Jantz says.

“I had gotten very jaded on my own overinflated view of the importance of things I’ve done. Maybe what’s more important than me going in and evaluating someone is to facilitate their self-reflection.

“I don’t know what happened five minutes before I walked into the classroom. So instead of evaluating what I see, it needs to be more of a conversation—or, being evaluative in conjunction with the student [teacher], as opposed to evaluative of the student.”

An important takeaway of his year in an urban classroom is the belief that “we [at Bethel] need to get our student teachers into Wichita. We do a great job of preparing kids for the surrounding small- and medium-sized town and rural school districts. We need to do a better job preparing them for Wichita and bigger schools.”

Jantz is satisfied that his instinct on the value of this particular kind of sabbatical was a good one.

“I don’t know why other [education professors] don’t do it,” he says. “I think it could be a model to follow even outside teacher education—at least in the professional programs. You’re out there seeing what it’s really like, what your students can expect.

“People ask me all the time, ‘What did you learn?’ It’s like people thought the secrets of the world were going to be opened to me because of this experience.

“The truth is much more mundane and common-sense. I made a list I think everyone should abide by whether you’re a teacher or something else: Make friends at work. Be kind. Respect your students—or co-workers—and expect respect from them.”