Preheim finds culture, service and ministry during summer in the city

Junior Ryne Preheim was looking for a summer in the city, and he got it by experiencing summer in a city church. 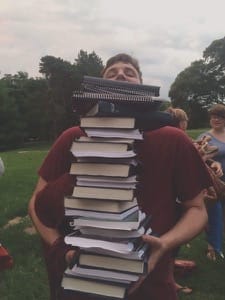 Preheim grew up in a Mennonite Brethren congregation in small-town central California. He says what he wanted from the summer was to “acclimate to Kansas, and to living in a big city.”

“Rainbow is buzzing with activity during the summer, and so we thought it would be a good placement for an MIPer,” Harder says.

One of the church’s primary summer activities is its participation in the eight-week Children’s Defense Fund Freedom School, which involves 100 local children and their parents. Rainbow sits in the heart of Rosedale, an ethnically diverse and predominantly low-income Kansas City neighborhood.

“I helped with Freedom School for three weeks,” Preheim says. “I had the chance to engage one-on-one with some of the kids and find out how [this experience] affects them. I got to see how much planning and preparation goes into it.”

He was also involved in the Healthy Kids Carnival, an important Saturday event during Freedom School; an annual summer outreach event called Hot Dogs in the Park; and the Willa Gill Food Kitchen, through which Rainbow Mennonites help serve lunch to homeless and hungry people every other month.

Preheim started his MIP summer at Rainbow with a wedding and ended it with a funeral, he notes. In between, he visited with various church groups, prepared and preached a sermon and “sat in on church council meetings and congregational meetings. The church is going through a hiring process [for an associate pastor], so that was interesting.”

A couple of highlights for Harder: “I enjoyed starting a congregational meeting by having Ryne pretend to be a co-sports broadcaster [with me]. On Aug. 7, we had him start worship by running in with a homemade Olympic torch to the theme song of [the movie] Chariots of Fire. He was superb.”

However, she says, “I could tell pretty early on that Ryne was not interested in being a congregational pastor per se. He might have told me that on Day One.

“I encouraged him to see this as an opportunity to grow in his leadership and communication skills. Being immersed in a congregation gives a person a chance to observe a lot of human interaction, communication and conflict.”

Preheim agrees his MIP summer did just that. As a communication arts major, his experience and interest have been in broadcast journalism, as well as theater, for which he has a scholarship.

“I’m comfortable communicating without getting too personal,” he says. “This [MIP] experience expanded how I communicate with people, when I’ve developed a relationship.”

Harder says she wanted to have a Bethel student at Rainbow “in hopes that the Bethel-Rainbow connection remains strong.” She was specifically interested in having Preheim because of the advocacy work he has done on behalf of LGBTQ Mennonites and Christians, much of which he writes about in his personal blog.

Preheim says he liked the fact that Rainbow is a historically welcoming and inclusive congregation (and Harder herself blogs, at overandaroundtherainbow.com).

“I like to remind people that there are nine doors one can choose [to enter] the Rainbow sanctuary,” she says. “I think this is symbolic of the freedom and space we try to cultivate at Rainbow, not forcing everyone to walk through a single door, or walk a uniform path of faith.”

For his part, Preheim has only positive things to say about working with Harder. “She’s a great person, a great leader, a great boss. Not really a boss—she was mentoring me.”

“In some ways, I felt like I was also a Ministry Inquiry Program participant,” Harder says. “Having someone observe, ask questions, poke fun at me and look to me for guidance made me feel not so much like the expert but a co-learner. I think this summer was as much about my own leadership development as it was Ryne’s.”