Bethel looks at ways to improve enrollment after 2016 numbers fall

Bethel saw a dip in enrollment for 2016, but the news wasn’t all bad. 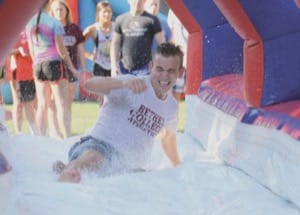 Tuesday, Aug. 16, 5:17 p.m., the Green Slip-slidin’ away: senior Ryan Ford enjoys one of the inflatables at the block party on the Green that was the culmination of Thresher Days, the orientation period right before the start of fall classes.

Though first-time freshman numbers were smaller than anticipated, the GPA and the ACT scores of the Class of 2020 were slightly higher than those of previous years.

“We didn’t reach the number we had set as a goal,” said Andy Johnson, vice president for admissions. “We’re not happy about that, but we’re evaluating our methods—looking for ways to do a better job of making sure students know Bethel is a great place to get an education.”

President Perry White pointed to the reality that higher education faces nationwide—that “paying for college is increasingly difficult.” Finances are one reason for a decline in college-student numbers across the board.

A new initiative at Bethel, that comes with the hiring this fall of a staff person whose position is dedicated to student career services, will be a focus on finding employment for students beyond campus, in the local area, while they are in school.

Bethel’s overall enrollment went from 525 at this time last year to 460, a decrease of 12.3 percent.

The Class of 2020 includes six high-school valedictorians, with 12 percent of freshmen coming from the top 10 percent of their graduating class and 37 percent from the top quarter.

There are two students from Germany, from the Bergische Universität in Wuppertal, as part of the exchange program that has been in place since 1951.