Junior Eric Preheim has been golfing from a young age. 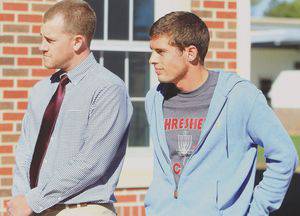 Matt Hein ’09, left, and Eric Preheim listen to a speaker during the ribbon-cutting for the new disc golf course on campus.

That’s not surprising, considering he’s from Martinez, Georgia, a suburb of Augusta, home of one of the most famous golf courses in the world, Augusta National.

But wait—not that kind of golf. Preheim’s requires nothing but some small, flat, plastic discs and mesh baskets.

When he came to Bethel—where he’s majoring in business and starts on the soccer team at midfield—he discovered there actually was a disc golf course not too far away, at Centennial Park, which is less than a mile from campus.

Last fall, as he started his second year at Bethel, Preheim decided to plug into the annual clubs convo held each fall. Representatives of campus clubs and organizations briefly describe their group and then sign up new members.

I knew there were a few others who shared my interest in disc golf, Preheim says, so I decided to see about starting a club.

To his surprise, a few turned out to be around 40 who signed up that day.

My goal was to get one golf tee on campus, so we could practice putting, Preheim says. But my friend BJ Heffernan [2014 graduate and soccer teammate] told me I should dream bigger and think about doing a whole nine-hole course.

With that in mind, Preheim decided to run the idea past Bethel President Perry White.

Eric came to me representing the Disc Golf Club, White says. I encouraged the idea [of putting a course on campus], as I am interested in any idea that contributes to quality of campus life for our students and gets them out of their rooms and into the sunshine.

In addition, White said, I saw an opportunity for Eric to have a learning experience and build his resume. Thus, after suggesting that Eric take his proposal through Student Senate, as appropriate processing and for their support, we connected him with Matt Hein ’09 in our advancement office.

The president asked me to start designing holes, Preheim says. I presented about 60 [ideas] to him. He saw issues I hadn’t thought of, like student safety and long-term plans for the buildings.

After narrowing down the nine holes, the next task was to come up with money for tee boxes—which are actually metal mesh baskets on poles—and signage.

Eric and Matt identified potential sponsors from our business community, set up meetings, built a case for support and solicited them for donations to the course, White says. Eric took the assignment very seriously. Matt, with his connections in our community, was instrumental to the success of this project.

I had business contacts already established from my work at Sand Creek Station Golf Course, Hein says. I was a mentor to Eric to help him set up meetings to generate sponsor dollars and give him advice on project management and development.

I set up the meetings and introduced him, and he did the presentations and follow-up. 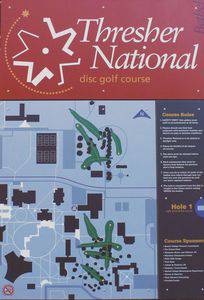 You can find a map of Thresher National Disc Golf Course on the west side of Franz Art Center.

Representatives of many of those were on hand Oct. 14 for the official ribbon-cutting (sponsored by the Newton Area Chamber of Commerce) for Thresher National Disc Golf Course, with a ceremonial throw to the first tee.

I’ve already seen lots of use, during weekdays and on weekends, Preheim says. We want visitors from off-campus to come and use it.

A map of the whole course is mounted on the west side of the Franz Art Center, just around the corner from the first tee. The course is open year-round during daylight hours.

Anyone who wants to try out the course using official discs (smaller and heavier than most Frisbees) can borrow them for up to 48 hours or over a weekend from Thresher Bookstore, open Monday through Friday, 8 a.m. to 5 p.m. The bookstore will also be selling regulation discs with the Bethel College logo.

Every day, from my office window, I can see people making their way to the first tee box, White says. I believe it will be a great addition to the quality of life on the Bethel campus, and thank Eric and Matt for their work on this project.