Senior art major Jessie Pohl now has a second book to her credit. 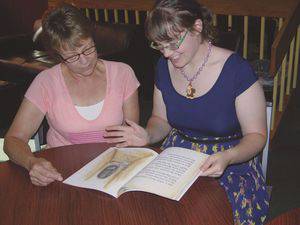 Brenda Eck, left, and student Jessie Pohl look at a copy of Big Brutus, the Kansas Coal Shovel. Eck wrote the book in collaboration with her cousin, and Jessie illustrated it. Photo by Melanie Zuercher.

Pohl is the illustrator of Big Brutus, the Kansas Coal Shovel, a new children’s book by Brenda Eck of Goddard, in collaboration with her cousin, Marilyn Kuhlman of Maize.

Rowe Publishing of Stockton published Big Brutus and the book is available on its website, www.rowepub.com, as well as through Amazon.com and at Kauffman Museum on campus.

That wasn’t how Eck and Kuhlman found her, however.

We had been looking for an illustrator, says Kuhlman. It was hard. We tried a couple of people we knew, but they were too busy and it didn’t work out. We interviewed a commercial artist, but it just wasn’t right.

We decided to start calling colleges.

Kuhlman had attended Bethel a number of years ago for her teaching recertification, so she knew the campus and found Bethel to be a nice school. I was impressed with the young people here.

We talked to [Professor of Art] David Long and he gave us several names, says Eck. One was Jessie. David contacted her and she agreed to do it, so we went to her home in Moundridge to meet with her.

Eck and Kuhlman grew up together in St. Mark’s and graduated from Sacred Heart High School. After they had retired from teaching careers, we talked about writing a book together, Eck says.

When their first attempt at the great American novel didn’t go anywhere, they decided to try something different—a children’s book.

Eck’s daughters attended Pittsburg State University, so she had visited Big Brutus, the gigantic electric mining shovel used to strip-mine coal in the 1960s and ’70s in southeast Kansas.

While not the largest such shovel ever built, Big Brutus is the largest still in existence—160 feet high and 11 million pounds.

The machine is now the centerpiece for a mining museum in West Mineral, southwest of Pittsburg.

Pohl found the experience of working with two people, whom she had just met, different from doing the same kind of project with her father.

But, she says, it was awesome working with Brenda and Marilyn. They came up with all kinds of ideas I hadn’t thought of.

It was a collaboration that worked really well, Eck adds. She had lots of ideas and enthusiasm, which the commercial artist didn’t.

It was fun to watch how much you were all in sync that day at our house, adds Becky Pohl, Jessie’s mother.

Jessie has been so nice to work with, says Kuhlman. We didn’t want to be overbearing, like we knew best, when she was the artist.

You weren’t, Pohl assures her.

Pohl had a summer full of books from many different angles. In addition to working on the illustrations for Big Brutus, she spent a month interning with Teresa Pankratz ’78, Chicago, who produces artist books in her studio.

Pohl helped out in the studio, including working on making 15 copies of one of Pankratz’s artist books.

We didn’t make the paper, but we did everything else, Pohl says. We measured, folded, cut and then did it over again. It required a lot of precision.

The precision was a skill I needed to master, she adds. I learned patience.

In addition, she met other artists and illustrators, visited a store that sells the artist books that Pankratz and others create and learned about pricing and marketing artwork, as well as what an artist from Kansas can do to get work out there.