The 8th annual STEM Symposium, part of Bethel’s 44th Fall Festival, brought three alumni to campus to talk about their research and work in psychology. 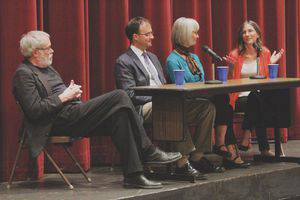 Paul Lewis, left, moderates a panel of three Bethel alumni talking about their experiences of working in the field of psychology—David A.S. Kaufman ’98, Louise Hawkley ’95 and Angie Troyer ’88. Photo by Vada Snider.

The symposium ran from Friday afternoon through Saturday morning, concluding with a reception for all STEM alumni and students (STEM covers biology, chemistry, computer science, mathematics, natural sciences, physics and psychology at Bethel).

The first speaker was Louise Hawkley ’95, Homewood, Illinois. Her topic was Loneliness (Still) Matters: Phenomenology and Consequences of Feeling Isolated.

Hawkley is a senior research scientist at the National Opinion Research Center at the University of Chicago. She studies how psychosocial factors may explain individual differences in health and well-being during aging.

An ongoing theme in her research has been the origins and consequences of loneliness and social connectedness. More recently she also has begun research on gender disparities in STEM education.

The second lecture was Optimizing Attention in a Scattered World: Recent Advances in Neuropsychology and Neuroscience by David A. S. Kaufman ’98, St. Louis.

Kaufman is an assistant professor in the Department of Psychology at Saint Louis University. He is a licensed clinical neuropsychologist and an active researcher of brain function in a variety of clinical populations. 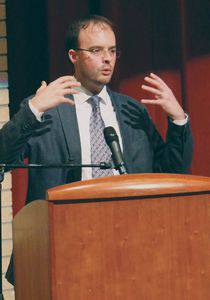 Kaufman’s clinical interests follow human growth and development across the lifespan. His research has employed electroencephalographic and neuro-imaging methods in studying attention and cognitive flexibility in healthy and neurological populations, notably patients with traumatic brain injury.

A panel discussion about careers in psychology finished off the public part of Friday’s STEM Symposium.

Troyer is the professional practice chief of psychology and program director of neuropsychology and cognitive health at Baycrest in Toronto, and an assistant professor in the Department of Psychology at the University of Toronto.

She has worked as a psychologist at Baycrest since 1997, where she developed and implemented the Memory and Aging Program and provided clinical neuropsychological assessment services.

She is co-author of a recent book, Living with Mild Cognitive Impairment: A Guide to Maximizing Brain Health and Reducing Risk of Dementia (Oxford University Press, 2012).