Allison McFarland may not have brought a medal back from the Winter Olympics, but she has plenty of stories to tell. 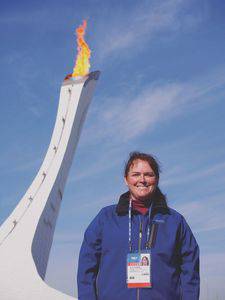 Allison McFarland and the Olympic flame at Sochi, Russia

The chair of Bethel’s business and economics department spent three weeks of her sabbatical last spring semester as a volunteer at the XXII Olympic Winter Games in Sochi, Russia, Feb. 7–23.

She began the application process almost a year before that, first entering the online application portal, followed by an interview via Skype and an English proficiency test. She was accepted and then issued a humanitarian visa—very different from a tourist visa, she told students gathered in a Bethel College convocation Sept. 8.

McFarland’s application was among the 25,000 approved out of about 200,000 sent. Eighty-five percent of volunteers were under age 25, and only about 50 were American.

The Sochi Games were organized into two clusters: a coastal cluster for ice events (indoors) and a mountain cluster in the Krasnaya Polyana Mountains for skiing and sliding sport events (outdoors).

McFarland was initially disappointed, she says, to be assigned to the mountain cluster. I thought, How about ice hockey or speed skating? It turned out to be a great assignment.

Sporting events held in the mountains included bobsledding and every kind of ski sport.

Being in the mountains, she got to see a number of those events. She also managed to get in to see a curling match, Great Britain vs. Norway (where, as a piper herself, she was happy to see bagpipers leading the teams onto the ice), and the Austria vs. Slovenia hockey game.

These were tickets I got by begging, borrowing and looking desperate, she says.

The mountain cluster turned out to be a really great thing, she continues. It was almost always sunny and 75 degrees—great for spectators, not so good for competitors. 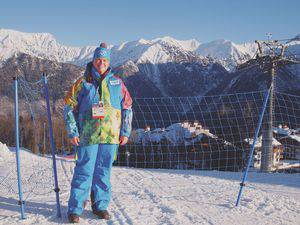 Allison McFarland poses in front of one of her favorite views, the mountains near Sochi, Russia, wearing her official Sochi Olympics volunteer gear, which she fondly called her Smurf outfit.

For someone from Kansas, the mountains were the best thing. You’d get there early, it was quiet and peaceful. But then—BAM! Over the loudspeaker would begin a one-hour loop of American dance music, 9 a.m.–10 p.m. every day.

As a professor of marketing and management, McFarland hoped to see event management strategies played out on an international stage.

It proved to be not quite what she expected.

For example, team leaders were chosen mostly on the basis of whether they could speak some English (in addition to being fluent in Russian).

When McFarland questioned some of her fellow volunteers about having to pass an English proficiency test, the response was often: I got someone else to take it for me.

She was a bit disturbed to find that the system for handling all the legal and travel documents for 3,000-plus volunteers at her housing complex consisted of a single table piled with the papers. 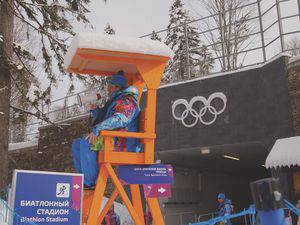 From a business point of view, it was interesting that there was no one selling anything except a company named Bosco, she says. There were no vendors hawking souvenirs outside the venues. There was not a single short-sleeved T-shirt anywhere—which we would have liked to have because it was so hot.

One of her non-volunteer activities was to visit Russian grocery stores to see the kinds of products they carried.

It was mostly American brands. The impact on American corporations will be significant as our government tightens sanctions on Russia [because of continuing conflict with Ukraine].

Typical volunteer days were about 12 hours, nearly half of that taken up by the commute from the coastal part of Sochi, where the volunteer housing was, to the mountains.

I was a human marker on the cross-country course one morning when it was foggy, and they didn’t want the skiers to fall off the mountain, McFarland says.

When the Bethel students had a chance to ask questions, one wondered: Did people disrespect you in any way because you were American?

Most Western volunteers received the same reaction, McFarland says. People were completely surprised to see us there. We were equally surprised to see an American spectator. There were so few from the West —U.S. or Great Britain. (This was mostly because of security concerns.)

After the Russians got over the shock that someone from America actually came, they were very kind.

McFarland reflects on the value for her teaching that come from her experiences in Sochi.

I had hoped to see examples of Russian management, she says. But everyone was so young [and lacking in experience].