Maroon & Gray and the GrayMaroons: Notes from Bethel’s Colorful History

How did Bethel become the college of the maroon and gray? 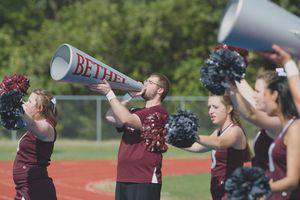 Bethel chose these colors in 1907. There is not much information about how this happened, except for one clue.

Maroon and gray were the class colors of that year’s senior academy class and the seniors, apparently, were a powerful force on campus.

These colors endeared themselves to Bethelites, and they were enshrined in the Bethel alma mater hymn, Maroon and Gray Oh Fairest Colors (1916). Bethelites also created a composite form called the Graymaroon, a vague, intangible icon that fused the two colors into one.

Graymaroon became the name for the yearbook (1915–59), and for the athletic teams (starting in the 1920s). Bethel students for decades could proclaim: We are the Graymaroons. Who was the ingenious inventor of the term Graymaroon?

Recently, information has come to light. In a letter from 1919, Barbara Hirschy Habegger, a graduate of 1916, wrote about receiving her copy of the 1919 Graymaroon, in which she said: I think our class will always enjoy them since it was our class that edited the first number [1915] and because it was our departed Irvin Haury that coined the word Graymaroon.

This information identifies Irvin A. Haury ’16 as the creator of the Graymaroons. Barbara Habegger’s reference to our departed Irvin Haury was tragically true. Irvin, the son of Professor Gustav Haury, briefly taught French and Spanish at Bethel but was drafted into the army at Camp Funston during World War I. He died at the camp from influenza in 1918.

David Habegger ’46, son of Barbara and Alfred Habegger ’16, came across his mother’s letter while going through family papers.

Keith Sprunger is emeritus professor of history at Bethel College. He taught at Bethel 1963–2001. His main publications are in the area of English Puritanism and Mennonite history. He is currently working on the history of printing and Puritan and Mennonite church architecture. The three Sprunger children are David, Mary, and Philip, all Bethel graduates, and all are now college teachers.