Finding the Spirit of an Iconic Race

Since its first running in 1916, the Pikes Peak International Hill Climb has become one of America’s most beloved and iconic automobile races. 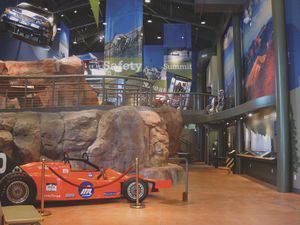 When the El Pomar Foundation of Colorado Springs decided to build a museum to commemorate the event, they wanted to re-create a unique and exhilarating experience, like the race itself. To do that, they went to a known factor—Bethel’s Kauffman Museum and CSNA Architects of Colorado Springs.

The foundation knew this team because, in the mid-2000s, Gregory Friesen ’79 of CSNA invited Kauffman Museum staff to work with him on creating the Carriage Museum in Colorado Springs for the El Pomar Foundation. (Friesen and CSNA have worked with Bethel on campus master planning and were the architects for Voth Hall and Krehbiel Science Center.)

The Carriage Museum, which is on the grounds of the historic Broadmoor Hotel in Colorado Springs, brought Spencer Penrose’s collection of carriages and artifacts to a space in the Broadmoor’s Events Center. Penrose started the Pikes Peak International Hill Climb to promote the road he had built to the peak.

He also created the El Pomar Foundation, which has as part of its mission to preserve his legacy. 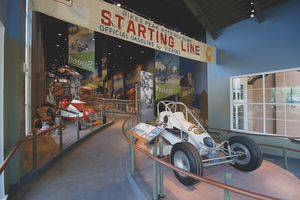 In 2012, the foundation decided to build an addition onto the Carriage Museum that would tell the story of the race.

In collaboration with CSNA Architects, we worked to design an immersive space that embodied the cultural and historical significance of the Hill Climb, says Chuck Regier ’81, Kauffman Museum exhibit designer.

Using a ramp shaped to emulate the Pikes Peak Highway, visitors ascend through the museum, encountering historic automobiles, gathering historical and scientific information and experiencing the unique flavor of the race up the mountain along the way.

From the colors on the walls to the copy accompanying the artifacts, we worked to shape the space in a way that authentically captured the spirit of the Pikes Peak Hill Climb, past, present and future.

Kauffman Museum works closely with Flint Hills Design of North Newton when designing and building exhibits, whether for the museum itself or outside projects.

So all together, that meant 10 Bethel alumni on the project: Friesen; for Kauffman Museum, in addition to Regier, Rachel Pannabecker ’80; for Flint Hills Design, Joel ’06, Aaron ’11 and David Gaeddert ’13, Evan Fast ’10 and Nathan Bartel ’02; and Tim Goertzen ’81 and Joe Smucker ’84, both of Goessel, who did fabrication and installation in Colorado Springs.

Jason Campbell, curator of the former Carriage Museum, now renamed the Penrose Heritage Museum, said after the opening of the Hill Climb addition, I’m pretty speechless [about] everybody’s reactions. Everybody thought … the wow factor was a 10-plus. It was beyond expectations.