At the Crossroads of Justice and Caring

Annaken Mendoza–Toews, Colorado Springs, Colorado, graduated from Bethel in 2000 with degrees in social work and global peace and justice.

She went on to the University of Washington to complete her master’s degree in social work, choosing a not-so-traditional concentration, multi-ethnic practice. It involved her in the lives of vulnerable populations such as refugees and women, and seemed like a natural convergence of her two undergraduate majors.

When she was done with the degree, she realized she wanted to work with newcomers to the United States. After a year as a school social worker, she decided she wanted to learn Spanish and moved to Cuernavaca, Mexico, for an eight-week intensive language program. She ended up living in Mexico for two years. She did English-language tutoring; taught English, including as a classroom teacher for first- and second-graders; and worked on formulating my career interests.

Returning to the United States, Annaken first worked as a paralegal for PROBAR (Pro Bono Asylum Representation Project) in Harlingen, Texas. She then moved to Lutheran Immigration and Refugee Service (LIRS), where her caseload was made up of unaccompanied minor children in federal detention after crossing the U.S.-Mexico border without documents. This fit her gifts and training better, she says—at LIRS, she was a social worker providing best-interest recommendations for children in immigration custody.

In 2007, Annaken married Francisco Mendoza, a physical therapist, and when they moved to Colorado, she began working for the Colorado Organization for Victim Assistance (COVA) in Denver, where her clients were victims of human trafficking and labor exploitation.

Annaken, who now works full-time at home raising daughter Lena, 2, was on one of two social work alumni panels that were part of the special symposium held on campus Oct. 17–18 to celebrate 40 years of social work at Bethel. 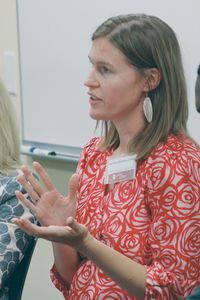 Context: Although the issue of children crossing the border has been all over the media in the past six months, is it true this is not a new problem?

Mendoza-Toews: There is always ebb and flow in immigration, correlated to U.S. economic needs, especially agriculture. It’s a country built on immigrants. In the 20th century, the bracero program brought temporary workers [from Mexico] in legally and then, when they were no longer needed, the program was cut off and many were sent back. In the ’80s, there were the civil wars in Central America and thousands of refugees fleeing for safe haven. That’s when PROBAR got started, to help people get political asylum. In the 21st century, 9/11 had a huge [negative] impact on immigration policy. 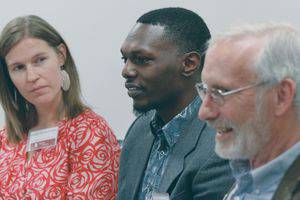 The kids have always been there. In the 1990s, they weren’t treated any differently than adults in INS [Immigration and Naturalization Service] custody. They were put in with adults, with criminals, without much attention to their cases. In about 1994, the courts found the INS detention standards substandard and inappropriate for children. The minor represented in that case, which was paramount for improving standards for child detention, was released to relatives in the U.S. so she could await her immigration court hearing out of detention, rather than detained as had been the precedent until the case overturned that. Custody of unaccompanied immigrant children went to the Office of Refugee Resettlement, which was part of Health and Human Services [rather than the Justice Department, which oversaw INS] and more humane and child-friendly.

Context: What are some of the reasons they come?

Mendoza-Toews: The ’90s was the era when many residents of the U.S. were deported back to their countries of origin—in particular Guatemala, Honduras and El Salvador—after serving time for criminal activity in the U.S. They would often get involved in narco-trafficking and organized crime back home, often because they had no other economic options. This fueled the drug trafficking and violence that communities in those Central American countries are experiencing now. I see that as part of the historical context for how violence has increased so greatly in these countries over the last 20-plus years.

The underlying framework—the perfect storm—that produced an explosion of young people with very limited or no economic opportunities is the combination of extreme poverty and unprecedented levels of community violence that have permeated these societies, things their governments are incapable of or unwilling to address. That violence has been fueled by the narco-trafficking industry’s power at an unprecedented level.

These are not just gangs—they are organized crime organizations with resources and intelligence, very interconnected with political institutions and systems and organizations.

In the summer of 2014, legal and immigration advocates were talking about the fundamental poverty and violence in which children are living in Central America, with no future or hope of anything in their own country. It’s common for the narco-traffickers prey on young children, sometimes kidnapping them from school to force them to work.

Context: When you began working specifically with victims of human trafficking, what overlap did you see from the work with unaccompanied immigrant children?

Mendoza-Toews: Unaccompanied minors are very vulnerable. We realized [when I was working with LIRS] that often they were already being trafficked or were on their way to it. They get into forced labor situations with their caregivers. Or they are coming across as drug carriers. Maybe the only relative [they can go to] is a distant one, someone with enough loyalty to do a favor but who will expect something in return. There are a number of risk factors for exploitation.

Context: What were some common situations you worked with?

Mendoza-Toews: Human trafficking takes many forms. It often intersects with domestic violence and sexual assault. Labor [situations are] actually more hidden or subtle. There are some kinds of legal labor exploitation in the United States that don’t fit the legal definition of trafficking.

I was with COVA on a two-year grant for services to victims of trafficking. The first year, we were restricted to only foreign nationals. Many were in debt bondage or forced labor. Women might be in arranged marriages where they were essentially slaves for their husband’s family.

In the second year, we found some unrestricted funding, because the need was there in Denver [with American citizens], too. With U.S. citizens, you tend to see women in commercial sexual trafficking and men in labor situations. There were people who were poor, young and transgender—some of the most vulnerable.

One thing we saw were Peruvian men, from the high, mountainous areas, who were brought in on agriculture work visas to the Western Slope to be ranch hands. There is a highly organized system of recruiters and transporters for this. And if they are unlucky, they end up with a rancher who exploits them—doesn’t pay or pays late, provides crowded, substandard housing. And they’re out there in the middle of nowhere.

This illustrates the fine line between legal and illegal. The [labor] standards are so low for ranch hands. And in the contract world, it can be very challenging to identify trafficking. A rancher can say, I didn’t know [about an exploitive situation] because there are so many layers of sub-contractors. Exploitation definitely happens within the definition of legal work, but to meet the definition of human trafficking, it has to include several factors such as not being allowed to leave the work situation—being enslaved.

Context: What seemed hopeful to you in this work?

Mendoza-Toews: The clients are so resourceful and resilient. With the children, even when they had very few decisions they could make on their own, they still saw opportunities and options. With the trafficking victims, giving them access to something away from that world gave them such hope—even basic things. Teaching them to have good boundaries—to learn to rely on things that are for their good and their health. They’ve been in a situation of exploitation for so long [where everything they do is for someone else’s benefit].