Students find summer break a time of both earning and learning

Just because a school year ends and students leave for the summer doesn’t mean the learning stops, as Bethel College students can attest. 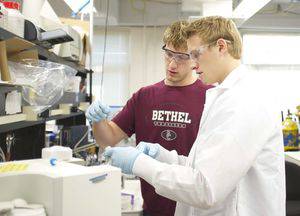 Aaron Rudeen, senior chemistry major from Osage City, applied months ago for a National Science Foundation-sponsored Research Experience for Undergraduates (REU) at the University of Kansas. Competition for REUs is fierce, with fewer than 25 percent of applicants accepted, but Rudeen was among them.

He spent 10 weeks over the summer in KU chemistry labs, working in breast cancer research. His task was to look for an enzyme in bacteria comparable to a human enzyme.

It varied every day, which is one of the reasons I really liked it, Rudeen says.

Sometimes it was just on the computer – crunching data, reading through other reports people had written. Other days, it was straight up on the lab bench, running reactions all day. It was a different experience every day.

Through the program, Rudeen says, he learned a lot about himself and his future direction. The experience helped him feel positive both about his decision to go to graduate school and his desired field.

A little over a thousand miles east, Megan Leary, junior from North Newton, worked as a nanny for a Bethel alumni family in Baltimore, Md. After seeing an ad in Bethel College e-mail, she applied for the position.

I would have worked at the [campus] bookstore if I hadn’t gotten this job, Leary said. But when I saw it, I thought maybe it would be nice to do something not in Newton, since I do go to school half a mile from my house.

Leary spent her summer living with the family as they transitioned into a new place, with the mother and young son in Baltimore while the father tied up loose ends at their previous home.

With her evenings and weekends free, Leary found time to enjoy her surroundings. She spent a weekend in New York and another in Washington, D.C., and also went with the family one weekend to New Haven, Conn. 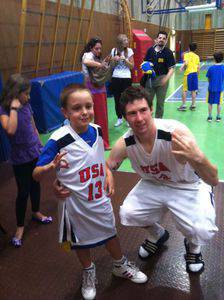 Justin Baldia, senior communication arts major from Lewisville, Texas, was a three-year member of Bethel’s men’s basketball team but chose not to play this year. However, he both played and coached the game during the summer.

At the beginning of the summer, Baldia spent 10 days travelling across Europe with an American club team that played five games. Back home, he coached a noncompetitive 7th-9th-grade YMCA basketball team, and decided coaching was something he wanted to keep doing.

As far as the Europe trip, it was the best possible way to end my [basketball] career, Baldia says. The trip gave some closure for my year.

And then [with] coaching, he continues, I know that I’ve moved on to the next stage. I never thought, growing up, Oh, I want to coach, but [after] this experience, there’s no way I wouldn’t want to. It’s sort of fairy tale-ish.

Jerrell Williams, junior Bible and religion major from Garland, Texas, served as a student missionary on a local reservation over the summer.

He had worked short-term with the missionaries in the past. This year, they asked him spend the entire summer with them.

Williams painted and did other facilities upkeep and improvement, gardened and volunteered with groups. One of the main places he worked was at the reservation’s Boys and Girls Club.

I always wanted to do youth ministry, but now I am looking at mission work as well, Williams says. [This experience] really cleared a lot of things up. It’s wherever I am called to be, but mission work is looking pretty good right now.