Robert Kreider ’39 would have deeply approved of a conference that took place at Bethel College recently. 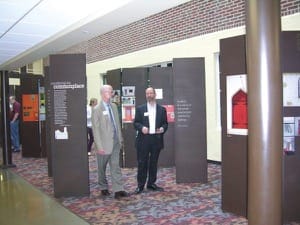 Robert Milliman, left, Bethel vice president for academic affairs, and Ross Peterson-Veatch, interim VP academic at Goshen (Indiana) College, visit during a break in the faculty and deans’ conference held earlier this summer at Bethel. They are surrounded by a display of photos by Bethel Professor Emeritus of Art Bob Regier that illustrate the conference theme of “fidelity of place.”

Although the churchman and historian died Dec. 27, 2015, he was still very present at the biennial Mennonite Higher Education Faculty Conference, held on the Bethel campus May 25-27.

Kreider and his brother, the late Gerald Kreider ’42, established the Marpeck Fund in the early 1990s to foster exactly the kind of collaboration and relationship-building that was the major outcome of the conference, said Bethel Vice President for Academic Affairs Robert Milliman.

Kreider “had a passion from the get-go for inter-Mennonite college connections and communication,” says Dale Schrag ’69, retired director of church relations at Bethel who was the closest the fund has had to “staff” while in that position.

Money from the Marpeck Fund has supported a number of collaborative projects over the past decade. Some are recurring: the periodic Mennonite/s Writing (most recent: Fresno [California] Pacific University, co-sponsored with Hesston College, 2015) and Sounds in the Land (most recent: Conrad Grebel University College, Waterloo, Ontario, 2014) conferences. Others are one-off, such as the academic conference “Marginal or Mainstream? (Anabaptists, Mennonites and Modernity in European Society)” at Bethel in 2010 and the Bluffton (Ohio) University/Hesston College joint “Celebration of Gospel Music” in 2013.

Most consistently, the fund enables the regular meetings of the “Marpeck deans,” the academic officers from each of the institutions, and the faculty conferences, which this year had the theme “Fidelity of Place.”

“[Kreider] had been in conversation with Brad Born ’84 [former Bethel academic dean, now returned to the literary studies department] and proposed ‘fidelity of place.’ That’s why Brad gave the opening keynote, to reflect on Bob Kreider’s contribution and his thoughts on the fidelity of place.”

Kreider, who grew up in Bluffton and later spent 20 years on the faculty and administration of Bluffton College, now University, loved that place and, in addition, “nurtured a deep love for the Great Plains, especially the tallgrass prairies of the Flint Hills,” Born said in his keynote. Kreider finished his academic career at Bethel and lived in North Newton for 30 more years.

“He would write often about his place on the Great Plains, and it was one such rumination in the summer of 2014 that seeded the idea for our theme at this conference,” Born said. “The subject line of his e-mail to me that summer day was ‘An awakening.’ In his attached essay, he wondered whether Mennonite institutions of higher education might awaken to a greater educational, ecological sense of place.

“In his closing paragraph, he asked: ‘Is there not an invitation, wherever one is placed, to see one’s locale as one of particular worth to be sought and treasured?’ In gathering here, we accept Bob’s invitation.”

Bethel and Hesston College were co-hosts for the conference. All sessions took place at Bethel except for an evening at Dyck Arboretum, near the Hesston campus, that included projected images of the plains landscapes and small towns of Kansas by Bob Regier ’52 accompanied by Raylene Hinz-Penner ’70, a faculty member at Washburn University, Topeka, reading work by Kansas poet William Stafford.

A number of faculty members (each school could bring up to five) and deans presented papers over the course of the day-and-a-half-long conference in which they could express their own views or reflections on “the fidelity of place.”

“I was happy with how people took the theme seriously,” said Milliman, “in creative and intelligent ways that resulted in contributions worth hearing and reflecting on.”

Milliman served as chair of the conference planning committee, but noted that “I can’t say enough about Dale Schrag’s contributions to the committee and the planning. The conference would not have been the same without him. He suggested all the keynote speakers and he planned the evening program at the arboretum.”

Reflecting on the overall conference, Milliman said, “Bob Kreider’s vision for the Marpeck Fund was for it to promote collaboration among the faculty and academic administrators of Mennonite schools—to give them a way to form connections and enduring relationships—and to [nurture] Mennonite education. There is more than enough splintering going on—we need to do things that promote unity.”

Milliman quoted from an e-mail he had received from Kreider in late October 2015: “I have … simply encouragement to use all of the funds in this year’s allocation to enhance stimulation and fellowship among students and faculty on our several campuses. Not the least—to undergird the bonds of our shared faith community.”