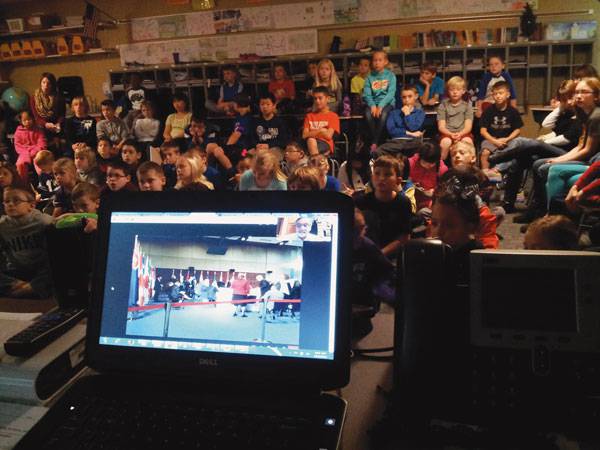 Fourth-graders from Wheatland Elementary School in Andover Skype® Dec. 4, 2014, with Larry Fisher, the Indonesian diplomatic interpreter for the U.S. State Department, about his trip to Asia with President Obama earlier that fall.

In fact, Todd, who is about to start his fourth year teaching 4th grade at Wheatland Elementary School in Andover, is constantly finding new and creative ways to use technology to bring the world to his class.

Todd is one of only 26 Skype® Master Teachers on the planet. The technology coach for the Andover school district is Dyane Smokorowski, the 2013 Kansas Teacher of the Year and the originator of the Skype® Master Teachers group—a small subset within the larger (in fact, global) Skype® in the Classroom program.

“Skype® Master Teachers is a collection of people around the world who use Skype® in different, more innovative ways to connect their classrooms to individuals and classes in the world,” Todd says. “My goal is to create global citizens and global classrooms. My students can go anywhere they want to, we can bring in anyone we want to, we can extend our learning anywhere we want to.”

Todd graduated from Bethel in 2004 with a degree in communication arts with an emphasis on print journalism. He spent a year working full-time at the McPherson Sentinel, where he’d done part-time work as a college student, before joining Brethren Volunteer Service (BVS), part of the Church of the Brethren denomination in which he grew up.

His first year with BVS, Todd was in the Washington, D.C., office of the organization, and his second year in Elgin, Illinois, the denominational headquarters. “Those two years got me outside my comfort zone,” he says. “They gave me a different view of the world, exposure to different kinds of people and to more global situations.”

Todd returned to Kansas and a job at the Salina Journal. “My main job was web reporter—get the story as a video, then put it together for the web and post it. There was such a contrast between working at a newspaper—increasing profit, staying relevant, the bottom line—and the serviceoriented things I’d been doing. I started to think about other [vocational] opportunities that would be more meaningful and fulfilling. 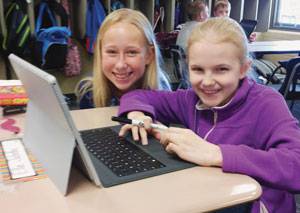 “There are a lot of teachers in my family. So I did it.” Todd completed his education degree and then taught 5th grade in Buhler for one year before taking the position in Andover.

Growing up in the Church of the Brethren and being part of BVS were significant to Todd’s outlook as a teacher and interest in global citizenship, he says. So was his education.

“During my time at Bethel, I began to embrace the idea that what we did mattered beyond a specific vocation. Through convocations, international friends and conversations inside and outside of class with professors, my worldview was being shaped by the values that Bethel espoused—service, peace, compassion and a solidarity with all people of the world.”

“Being exposed to new and different ideas during college helped me see that the world is bigger than just what you’ve experienced in your hometown.”

“While I didn’t get my education degree from Bethel, I value the liberal arts education and my communication arts degree. I feel that they help me in my effort to become a better teacher.

“Teaching is so multifaceted. I can see the benefits of my communication classes with Christine Crouse-Dick or talking philosophy with Paul Lewis to the way I teach, and my approach to students and their learning.”

In his second year teaching at Wheatland, Todd began to learn about the advantages of using Skype® in his classroom. “We were studying space, so I did some of the NASA Skypes® [with astronauts]. I got the idea that if you can’t go to these places for a field trip, because of the expense and the logistics, what about connecting virtually?

“Dyane has lots of connections worldwide, so she had the idea of starting the Skype® Master Teacher group. She proposed this to Skype®. They took it from there and she consulted with them.

“The group has a Skype® chat where we share ideas— throwing different things out there, getting feedback from each other. Even though most people haven’t met face to face, we’re still a pretty tight group, able to network and share resources.” 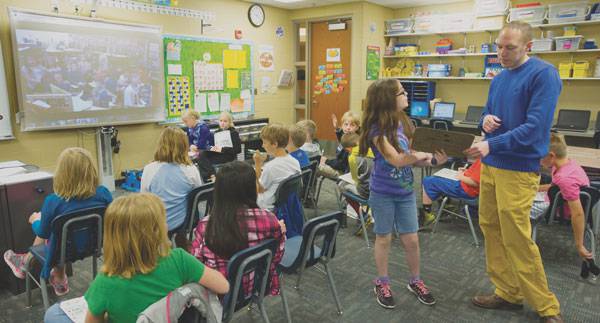 Near the end of the 2014-15 school year, Todd Flory led his 4th-grade classroom in a Mystery Skype® with a class from North Carolina.

The Skype® Master Teachers are mostly from the United States (five are from Andover) but also from Kenya, Greece, Serbia, the United Kingdom and Australia.

In his own classroom, Todd “really dived in headfirst, full-bore, this past school year.

“We talked with authors like Grace Lin, the Newbery Honor author of Where the Mountain Meets the Moon, a class read-aloud. We Skyped® with Kim Stafford, William Stafford’s son [who is a distant relative], who took the students through a writing exercise, then heard some of their writing samples and gave them feedback.

“We spoke with the Indonesian interpreter for the State Department. He Skyped® from Arizona about his trip to Asia with President Obama last fall, talking about the importance of language and culture.

“The most recent project was Skype® Around the World Day, April 16. We Skyped® from noon until midnight. Not all the students stayed all 12 hours but probably a third of them did. We talked to individuals or classes on all seven continents—in California, Hawaii, Ecuador, Bolivia, the U.S. Virgin Islands, Antarctica, Kenya, Northern Ireland, Greece, India, Pakistan, Indonesia, Vietnam, Japan, the Island of Saipan and Australia. The kids loved the Skype® but they also loved being in the school after hours and staying up late.”

Earlier in the day, Todd’s students had made passports, and before Skype® Around the World Day, they had researched Kansas economy, geography and culture in order to be prepared to talk about them and ask questions about those subjects to the people they Skyped® with.

“They filled the information into their passports. Then later in the week, I had them do a narrative-writing project.”

“It’s a really powerful way to see other cultures, to see peers and interact with peers who don’t look or sound like them, whose school is not like theirs, to see that the world is larger than central Kansas.”

“We have a map on the classroom wall where we note all the places we Skype® with. It brings social studies, geography and history alive [and creates] a more real world, instead of just something they look at in a book.

“One of the unintended benefits [of Skype®] is that it makes the world smaller. The smaller the world gets, the less things are unknown. The fewer things there are to fear, the more safe the world becomes. It’s beneficial to my students and it’s beneficial to the world as a whole. They’re building empathy and understanding.”

Todd plans to do another Skype® Around the World Day next year. “I kind of want to try a 24-hour one,” he says. “We’ll see.”

One of Todd’s favorite things to do is a Mystery Skype®, which he calls “a good introduction to using Skpe® in the classroom. I’ve done 12 or 15 Mystery Skypes® in the U.S. and eight to 10 with other countries.

“The teachers know where the other class is from but the students don’t. So the students ask Yes and No questions to the other class to narrow down the location. I preview the types of questions I want them to ask, to focus more on geography—cardinal directions, landmarks (like the Rocky Mountains or the Mississippi River), terms like ‘landlocked’ or ‘bordering other countries.’ They’re not allowed to guess until they have a really good idea of where the place is.”

“Skype® is a tool to take academic content we’re all supposed to teach,” he adds, “but apply it in a more meaningful, impactful way—how this math concept or these geography terms apply or play out in the real world.”

He continues, “My education philosophy this year was: Create a global classroom. Enable my students to become global citizens.

“I want them to know that things all over the world also affect their lives in Kansas. It’s all interconnected. Something that happens in a classroom on the completely other side of the world can also affect them.

“We’re all part of the same world. Their background, ideas and knowledge are just as valuable as ours. The more exposure we give kids to different parts of the world, the better people they become. We make the world a safer place.