Chemistry opens doors to the future

Amber Schmidt-Hayes loves science and she gets to spend all summer doing it. 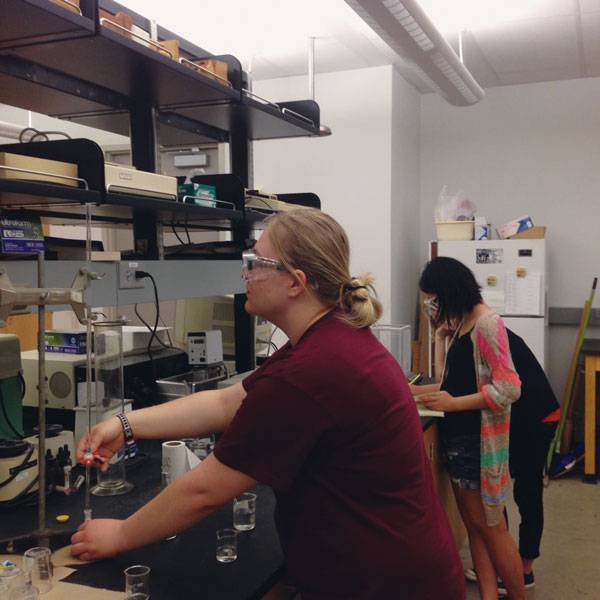 Amber Schmidt-Hayes, left, works at measuring solubility in a chemistry lab at the University of North Texas in Denton, where she is spending the summer in an undergraduate research program sponsored by the National Science Foundation.

She’s from Newton, a 2014 Newton High School graduate who just finished her freshman year at Bethel. Last spring, she learned she’d been awarded a prestigious REU (Research Experience for Undergraduates) from the National Science Foundation, which meant she got to do research in the chemistry labs at the University of North Texas in Denton.

As far as Bethel faculty can determine, Amber is the first Bethel student to earn this particular opportunity. “Gary Histand [professor of chemistry, currently on a two- year teaching leave in China] sent an e-mail to Katy [Lay- man, associate professor of chemistry] saying the NSF-REU was low on applicants this year and to encourage everyone to apply,” Amber says. “It’s a really cool opportunity.”

Amber is a chemistry major, which she pretty much knew she would be ever since she watched her NHS chem- istry teacher, Phil Schmidt ’96, “douse a T-shirt in liquid, then light it on fire, and it didn’t burn. It was the coolest thing I ever saw.”

This first year at Bethel, she enjoyed a titrations lab where she got to put liquids into different solutions to determine acid or base, which “made a lot of rainbow col- ors. It was just Kiley Varney [freshman from Hesston] and me in the afternoon lab so we got to do extra cool things.”

In her NSF-REU cohort at UNT, Amber is with eight other college students from schools in Arkansas, Califor- nia and Texas. Her hope of being in an organic/inorganic chemistry lab was fulfilled. The students are working on “measuring the solubility of different compounds, both organic and inorganic, in different liquids. We’re using the numbers we gather to estimate solubilities.”

This has applications for medical purposes, she says. “We can predict the effects [of compounds] on organs if they are taken or used as medicine.”

She adds, “I like being in the lab. It’s fun. I like discov- ering new things, and I like figuring out that something won’t work and why.”

Besides the fun in the lab, she is also enjoying “meeting science majors from bigger schools and comparing my experience at Bethel. They are amazed that I know every- one on campus and I can walk to all my classes in just a few minutes.”

“I have fun stories about my professors, while most of them say they don’t even know their professors’ names.” 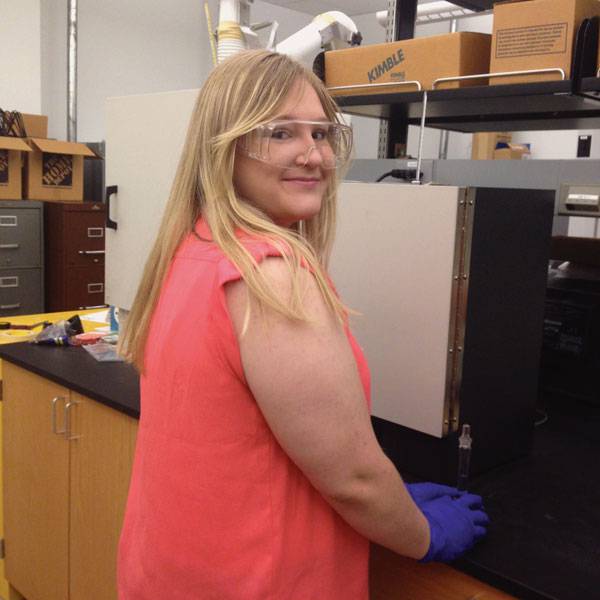 Amber Schmidt-Hayes in a chemistry lab at the University of North Texas in Denton. “I know research is a definite possibility for me,” she says.

Her first year at Bethel prepared her well for this sum- mer experience, she says.

“I was introduced to college through [College Issues Colloquy] with Rachel Epp Buller ’96. She was pretty clear with us about the expectations, and I got it—I’m in college now, this is harder. That work ethic has really helped me a lot here.”

She can also see how the NSF-REU will help her at Bethel in the future. Most immediately, the graduate as- sistant in her lab is sharing some tips on organic chemistry that Amber thinks will give her a boost when she takes the class at Bethel next year.

She will be listed as a co-author on a scholarly article, accepted for publication, about the summer’s research. “I’ll learn how to put it on a resume,” she said. “This is my first chemistry accomplishment, and it’s helping me start to build my resume.”

The NSF-REU students get to do plenty of fun rec- reational activities such as visiting Six Flags Over Texas but Amber finds it just as enjoyable getting to see “all the technology available at UNT. There is a spectrometer you can fit in your hand. It’s amazing.”

“I’m getting some ideas about what to do with my future.” 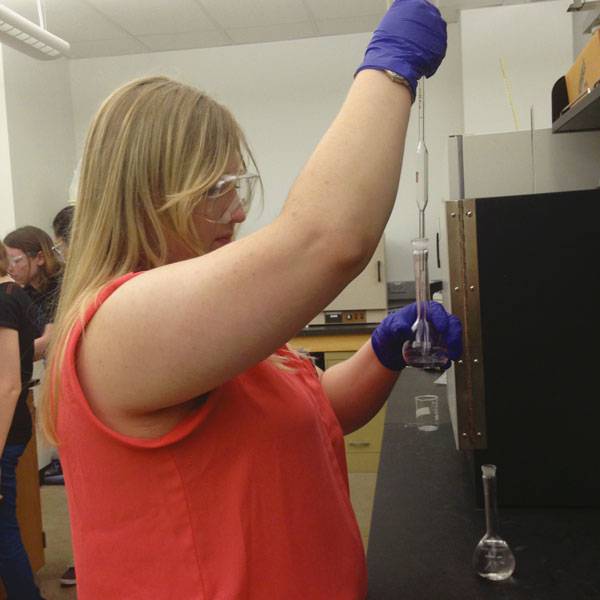 Amber Schmidt-Hayes in a chemistry lab at the University of North Texas in Denton. “I know research is a definite possibility for me,” she says.

“[In one of the leadership seminars] we met a guy who does patent law for Eli Lilly. That was interesting, because he started out in a lab. I know research is a definite pos- sibility for me. I’m also interested in pharmacy.

“I’m making some great contacts. Angela Wilson, the program director, has been all over the world to talk about chemistry with people. My mentor [for the REU], Dr. William Acree, is the head of the chemistry department at UNT.”

The experience of spending every day with other col- lege students like her, eating lunch and hanging out and talking about science, along with the research opportuni- ties, have been stimulating and valuable, she says. “It’s opening my eyes to many of the possibilities.”