For Sheldon Nunnally, Los Angeles, who just graduated from Bethel with a degree in social work, a trip to Kansas City in his final semester proved to be, in his words, “life-changing.” 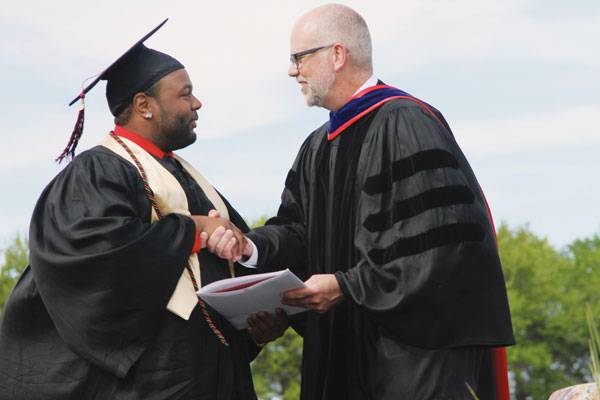 Hamilton Williams, associate professor of social work, took 10 of his students to the annual conference of the Association of Baccalaureate Social Work Program Directors (BPD), March 4–8 at the Westin Crown Center.

The students in Williams’ Intervention in Human Systems class had successfully applied to present a poster at the BPD conference. Sheldon had agreed to be one of two students who stayed with the poster to answer questions for judges and other visitors.

“I didn’t know how big this conference was until I got there,” he says. “Hamilton didn’t tell me because he didn’t want me to be nervous.”

Since the theme of the conference was “Educating the Masses,” the Bethel poster described how the Día de los Muertos parade that Intervention in Human Systems students help organize each fall, in conjunction with a Newton

Catholic church, can be used in place of a protest event to educate and inform.

“When people hear ‘protest,’ often they think ‘riot,’ or something negative,” Sheldon says. “We showed how, instead, a parade could inform about [a minority] culture and history, and even about issues such as voting, and could take the place of protesting.”

“Sheldon hit a home run with his connection to the dynamics in the community and the impact this has had since the parade began three years ago,” Hamilton says.

The size of the conference and the number and variety of people he spoke to were part of what made the experience significant for Sheldon.

“I think about my friends [back home in Compton], how many are in jail, or dead,” he says. “I had never done anything like this before—if they could see me now. I have a daughter, and I want to make her proud.

“It was also life-changing because school has not been so important to me before,” he goes on. “Sports was the main thing.

Besides being a confidence-builder, the conference put Sheldon and three of his peers—all of them young black males—in a surprising position.

“There are not a lot of males in social work, much less black males. They don’t usually see a group of young black men at a conference like this.”

“People would come up to us and say, ‘We’re so glad you guys are here,’” says junior Malcolm Mustin. “They said, ‘Keep it up—and see if you can [encourage] more males and more racial minorities to consider social work. We need them.’”

“It really affirmed this career choice,” Sheldon adds. “People were telling us they wanted us for their [master’s degree] programs.” 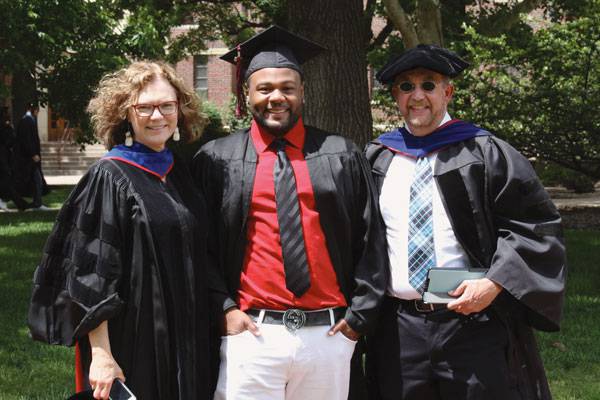 “The guys were really heavily recruited,” observes graduating senior Katelyn Melgren. “They saw the value placed on them, and how their education applies [to career choices].”

Sheldon would credit his education at Bethel and his social work degree with being life-changers, too.

For his senior seminar, he did an extensive data analysis on the topic of stereotypes of African Americans in U.S. culture and history. The evidence of stereotyping through the present day is sobering.

“TV influences what you think of a group or culture if you have never met or experienced the group of culture for yourself,” Sheldon says. “Before TV, the movies, beginning with silent films, reinforced, fostered or flat-out created white views of people of color.”

And it seems not much has changed, he says, when what media currently shows most of is “riot” situations in Ferguson, Missouri, and Baltimore, and on and on. “‘Thug’ is the new N-word,” Sheldon says. “‘Thug’ is what black people, mostly men, are called when they make white people uncomfortable.

“How do we fix it? I think about [myself] as a black man who has a daughter. I want to teach her about black culture, not leave it up to TV, music, movies or even school.”

Doing the research for his seminar proved to Sheldon “the importance of books. We need to read more books. We have to bring back ‘School is cool.’ Education is key—it’s powerful.”

Sheldon’s dream for using his education is “to start a non-profit, something of my own to help influence [young people] away from the stereotypes.

“When you’re being fed nothing good [at home]—your dad’s in jail and your mom works two jobs—who’s going to be your example? I want to find mentors from all places and races. If we did more treating people how we want to be treated, and were more willing or brave enough to speak against stereotypes [then things would get better].”