Not many historians have the opportunity to mentor four generations of students and colleagues. 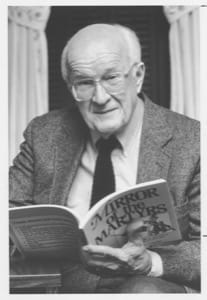 My dear friend Robert Kreider ’39, whose influence as church leader and Mennonite intellectual spanned the globe, did it with irrepressible curiosity, grace and a twinkle in his eye.

Robert became a mentor and friend to me in the mid-1980s, just as his storied career as an architect of Mennonite Central Committee (MCC) development and refugee resettlement programs, president of Bluffton (Ohio) College and peace studies professor at Bethel was giving way to what would become a prodigious, decades-long retirement. My professional identity as a historian was barely underway in 1983, when I returned to Bethel to complete an internship at the Mennonite Library and Archives as part my history graduate program at the University of California. That year, he was both directing the MLA and laying plans for a very active retirement from Bethel.

Over the next four years, I assisted him with a variety of Mennonite history ventures. Several of his books-in-progress, including a work commissioned by MCC, Hungry, Thirsty, a Stranger (1988), provided opportunities for scholarly collaboration. On research trips, he introduced me to his wide circle of friends and contemporaries. In Akron, Pennsylvania, he helped me understand intricacies of MCC’s history by sifting through files and conducting interviews with MCC workers with global perspectives. During our writing/editing sessions afterward, he taught me more than anyone else about the historian’s craft and artistry.

“I think of the campus Green, last October at Fall Fest; an hour walking around the circle, crowds of people, everywhere old friends, stopping to chat, some conversations about deeply personal matters, others about the little and the great issues of life. A sense of peoplehood, of belonging. … I think of convocations, Krehbiel Auditorium full of students, hearing addresses of urgent public concern, but best of all: the question period, with students raising their hands to ask thoughtful questions. Liberal arts at its best—a listening, probing, seeking community of learners. Sacred space.”

A few years later, I enjoyed Bob and his wife Lois’s hospitality while we organized personal and family files in preparation for his future writing projects, including memoirs My Early Years (2002) and Coming Home (2012). Downsizing—what he wryly called “clearing the desk”—was a formidable task, given his lifelong habit of accumulating books, papers, photographs, artworks, poetry and cartoons on subjects that interested him.

He was a gifted writer. Unlike many scholars, he often wrote for popular audiences through the church press, community newspapers and congregational and college campus gatherings. He had an accessible writing and speaking style. Although one might expect irony from social critics, he preferred a more direct approach, offering alternative perspectives so that readers might consider new angles. For example, his essay “A Hymn of Appreciation for Kansas” begins with a mildly sardonic quote: “Oh, if it weren’t for those monotonous hours crossing Kansas to get to the mountains of Colorado.” His quick rejoinder: “The plains of Kansas—monotonous to some, but a land of delight to those with eyes to see . . . driving west on Highway 96 in late June is not a monotonous test of endurance across a flat surface of boredom. It is a journey of infinite delights for those with . . . the sense to receive.”

He emphasized the importance of brainstorming, of testing ideas with others. His careful choice of words influenced generations of students’ use of language; decades back, he had begun employing in his own writings the anthropologist Clifford Geertz’s notion of “thick description,” illustrated here in a 2008 address about Bethel College that Bob titled “Sense of Place”:

He also was quick to say that he “felt the tug of the world beyond the campus.” Among the themes that illustrate his influence as mentor, historian, churchman: 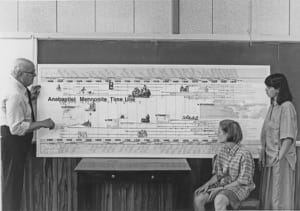 Robert Kreider with Marike Janzen ’95, left, and Lisen Reichenbach examine the Anabaptist-Mennonite Timeline, which Kreider and his daughter, Ruth Kreider ’85, created and published in 1985.

Looking back over his life, he wrote with gratitude about the last four decades in Kansas. “I have been energized,” he said, “by a fresh start, a second chance—Bethel years following the Bluffton years. I cannot escape a feeling that our move west [in 1975] was touched with divine leading and grace.” He added, “I have only a handful of friends my age or older with whom I can be in conversation. Surviving longer than others, I am called to nurture friendship with those who are younger.”

He had a name for this quest: “Finding Kindred Spirits.” Across his expansive, inquisitive journey, he found many kindred spirits, and I am so fortunate to have been one of them.