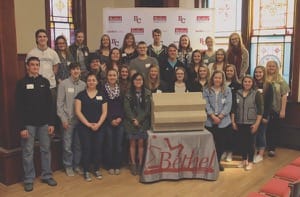 On March 5, Admissions staff welcomed incoming Bethel students (seniors in high school) for the 3rd annual Scholarship Day. It included a ceremony in the chapel meant to evoke “touching the threshing stone” at graduation.

Marlow Ediger ’53, North Newton, has received notice of the publication of the following manuscripts: “Grammar, What to Avoid in Writing,” Edutracks; “Developing a Philosophy of Science Instruction,” Experiments in Education; Essays in Teaching and Learning, a co-authored supplementary textbook; “Technology in the School Curriculum,” Australian Journal of Educational Technology; “Selected Leading American Psychologists,” College Student Journal; “Grammar in the Technological Age,” Voices, a Canadian journal; “Seven Pointers in Teaching Mathematics,” DELTA K; “Teaching Science in Depth,” Edutracks, “Listening in the Language Arts,” Reading Improvement; “Oral Communication Across the Curriculum,” Indiana Council Teachers of English Bulletin; and “The Teaching of Reading and Its New Emphasis,” Reading Improvement. He was reappointed to the editorial board of Edutracks, which is published in India, and his biography will appear in the 2017 Who’s Who in the World.

Glenna (Krehbiel) ’59 and Harold ’55 Loewer, Eunice, Louisiana, celebrated 60 years of marriage in 2015. They and all of their children gathered in July and, in observance of the actual day, Nov. 24, the couple took a three-day trip to see the Festival of Lights in Natchitoches, Louisiana, which featured more than 300,000 lights and 100 lighted set pieces—mostly biblical—downtown and along the banks of the Cane River.

Elaine Klaassen ’67, Minneapolis, Minnesota, is managing editor of Southside Pride, a community newspaper in south Minneapolis. She is also a facilitator with the Alternatives to Violence Project, which is affiliated with Friends for a Non-Violent World. Elaine taught piano privately and at Schmitt Music until 2014.

Arthur Clark ’72, Murrieta, California, is a retired U.S. Navy officer. In addition to his 20 years of military service, Arthur served as a federal investigator and a police officer, now retired. He coaches youth baseball and works with a paratransit company to help seniors and disabled individuals with transportation needs in the Riverside County area of southern California.

Bob Flickner ’71, Garland, Texas, has been voted by the National Junior College Athletic Association Men’s Basketball Coaches Association into its Hall of Fame class for 2016, one of only three individuals to be inducted this year. Bob led Eastfield College to 423 victories in 23 seasons. He retired from coaching in 1998 but still teaches physical education at Eastfield. During Bob’s tenure, the Harvesters compiled a 178-44 record in the Metro Athletic Conference and won 15 conference titles during one 16-year stretch, including 12 in a row. They advanced to the NJCAA national tournament 10 times from 1986-98. In 1997, five years after a national runner-up finish, Eastfield defeated Jefferson Community College (N.Y.) 79-75 to win the NJCAA national championship.

Steve Friesen ’75, Littleton, Colorado, is director of the Buffalo Bill Museum and Grave, which received the 2015 Denver Mayor’s Award for Arts and Culture.

Rodney Schmidt ’75, Newton, marked 40 years of working in the Bethel maintenance department at the end of last year. On Dec. 15, 1975, Rod started working at the college as a carpenter. He continues in that role today. Rod had graduated from Bethel the previous May with a degree in industrial arts.

Darrell Wiens ’72, Cedar Falls, Iowa, continues to teach and do research in the biology department at the University of Northern Iowa. Currently, he is mentoring two graduate and three undergraduate students in cell and developmental biology research. This year, he has taught Developmental Biology of Animals, Anatomy and Physiology I and II labs, and Adhesions and Junctions Among Cells. Darrell is one of the elders at Cedar Falls Mennonite Church, which he and his wife, Arleen Cook ’79, attend.

Wendy Funk Schrag ’86, Newton, received an award from the American Association of Kidney Patients in March. The organization traditionally presents an annual award to a physician or academic researcher; however, this year the association implemented a new award designated for a social worker. Wendy is the first social worker to be given the award. She helped develop the Right Start Program to support patients new to dialysis, has been on the steering committee for the Supportive Care for Kidney Patients Coalition and is a long-term volunteer with the National Kidney Foundation.

Rebecca Claassen ’01/’08, Overland Park, was honored as an MPN Hero at a gala in Orlando, Florida, last December. MPN stands for the field of rare blood cancers known as myeloproliferative neoplasms. According to the website www.voicesofmpn.com, “As a dedicated unit educator at the University of Kansas Cancer Center, Becca has brought a greater understanding of MPNs to the nursing staff. . . . In caring for patients, Becca provides meaningful guidance about financial assistance, clinical trials and treatment options, and support avenues to help them overcome daily challenges. In short, Becca’s tireless advocacy brings MPNs to the forefront for her peers and provides a sense of hope for patients.” Becca was one of only seven individuals recognized for 2015 by CURE magazine, which addresses cancer issues from the patient’s perspective.

Angelo Garibaldi ’09, Wichita, was featured in the Winter 2015 issue of Harvey County NOW magazine, in an article about how he’s making his way in the music business as the rapper Lyrical Miracle. Angelo, who has been writing lyrics since he was in 7th grade, started recording professionally while at Bethel and now has a studio in his basement at home. In his work, Angelo shares messages that are positive, uplifting and spiritually motivating. He has produced 11 CDs, each with around 15 tracks, including five on iTunes.

Joel Krehbiel ’06, Newton, earned a doctorate in theoretical and applied mechanics from the University of Illinois at Urbana-Champaign in 2015. He teaches physics at Hesston College.

Stephanie (Sowers) Sankar ’04, Kansas City, Missouri, was recently named a partner with Shook, Hardy & Bacon LLP as a member of the firm’s Global Product Liability group. She focuses on the defense of consumer product manufacturers in complex tort and product liability litigation. Stephanie earned a law degree from the University of Kansas School of Law in 2008, where she served as a note and comment editor of Kansas Law Review.

Clint Harris ’11, Austin, Texas, plays a University of Texas student football team manager in the 2015 movie My All American, a biographical drama based on the book Courage Beyond the Game: The Freddie Steinmark Story by Jim Dent, about a college football player.

Elizabeth Shelly ’13, Lenexa, is pursuing a doctorate in physical therapy from the University of Kansas Medical Center. She began her doctoral work in May 2015. (The editor apologizes for an incorrect listing in previous “Class Notes.”)

Kyle Unruh ’11, Lawrence, in his first year as director of bands for the McPherson schools, took the high school marching band to the Valero Alamo Bowl in San Antonio to perform before 64,569 spectators Jan. 2. The band won first place for Outstanding Music in Field Performance. Their show, “The Sound of Simon,” was based on the music of Paul Simon. On their Dec. 30-Jan. 3 trip, the group also visited natural bridge caves, the zoo and the San Antonio River Walk. Last fall, Kyle and the band earned superior ratings at both the Emporia State and Central States marching festivals.

Aimee Voth Siebert ’10, Denver, is a disaster behavioral health specialist and community inclusion coordinator for the Colorado Department of Public Health and Environment. She was featured in The Mennonite magazine’s Dec. 10, 2015, blog “Seven questions with...,” which highlights Anabaptists engaged in work and ministry around the world. Aimee answered questions about her church experience growing up, how Bethel College prepared her for her current work, what her “normal” workday is like, and how her faith affects her work.

Ken Ward ’11, Athens, Ohio, is pursuing a doctorate at the E. W. Scripps School of Journalism at Ohio University.

Alumni are invited to submit recent news of interest to others—marriage, job change, addition of a child, award, promotion, graduate school, retirement, and so on—to the Office of Alumni Relations. Mail to 300 East 27th Street, North Newton, KS 67117, e-mail to alumni@bethelks.edu or submit via the Bethel website at www.bethelks.edu/alumni-update. Please model your information after the current listings below, beginning with name, class year, city and state.

Anyone who earns 24 or more credit hours is a Bethel alumnus, whether a graduate or not. When reaching alumni status, they are assigned a “class year” (later replaced by “grad year” if they graduate). The year behind each name below is the person’s class year, often the same as the grad year unless the individual has told the alumni office that they wish to associate with another reunion year (as in the case of a five-year program, study overseas, etc., that delays graduation).