Knowing well that a picture can speak 1,000 words, Audra Miller, Hesston, wants to start a conversation about gender perceptions. 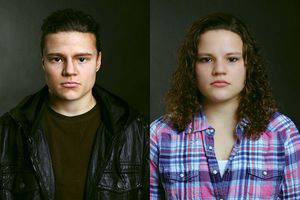 Miller, a fifth-year senior finishing degrees in graphic design, fine arts and communication arts, decided she didn’t have enough to do with getting her senior show (drawings) ready and her senior communications seminar project done in her final semester.

So—for fun, she says—she began doing a series of what she thought would be androgynous portraits. Miller has been taking photos for years and even has her own photography business.

Her idea for these portraits was to use contour makeup (employing shadows and highlights to emphasize, change or create certain physical features), clothing and poses to create photos of people whose gender couldn’t be determined just by looking at them.

As she began working on the project, however, she realized that to do what I wanted, I had to start with people who already looked androgynous, because to try to make them look that way ended up making them look like the opposite gender. And she wasn’t finding many of that kind of subject.

So this morphed into doing double portraits that showed people as both sides.

Almost as soon as she was done shooting, participants began asking to see their portraits.

Normally, Miller says, I would use social media for something like this [a collection of portraits].

But she was already surprised, she says, by the reaction of some of her subjects to their two-sided presentation. It was hard for some people to see a photo of themselves taken as the opposite gender.

Men are perceived as weaker when they’re seen in any kind of feminine way. They’re brought up to be tough, emotionless and the complete opposite of what the culture considers ‘feminine.’ And some of the women were unnerved to see themselves looking masculine.

If the portraits were presented out of context, she says, maybe they wouldn’t be appreciated, or have as much impact. They wouldn’t do the people in the shoot justice.

Plus, the reaction was making her think more deeply about her efforts.

These portraits needed words, or a speaker, or an event, she says. They needed to be part of something beyond a local gallery, because I think they’ll have more impact on people who don’t know the subjects. [If you know them], you use your previous knowledge of the subjects when you look at them.

And that’s where serendipity occurred. Heidi Johnson ’88, Fort Collins, Colo., contacted Miller out of the blue, to ask me if I had any work, or was willing to make some art, for a gallery in Fort Collins that is doing an exhibit on gender roles.

Johnson is connected to the Downtown Artery, which is part of an event taking place in Fort Collins in late April with an overall purpose of raising awareness of rape culture.

The idea is to think about how our society views gender and what that has created in our culture, Miller says.

For the exhibit, some of the photos will be printed life-size or larger than life, she says. Some will be regular 8x10s, side-by-side. I might project some on the wall. I would like to have one large double-sided portrait hanging from the ceiling, so you can’t immediately see the contrast. I’d also like to put together a book.

Miller realized that to do these things, and to transport the portraits to Colorado, was going to cost some money. She asked her former theater instructor, Megan Upton–Tyner, about ideas for raising funds. Upton–Tyner pointed her to GoFundMe, a crowd-funding website.

I’ve enjoyed seeing Audra’s growth as a photographer over the past few years, Schmidt says. It’s important to encourage and support young artists. I also think she’s working on a timely topic that will be exciting to portray visually.

Miller is stepping into the midst of a whole host of artists, past and present, who have used their art to try to make viewers think, says Rachel Epp Buller ’96, assistant professor of art.

There is a long history of artists using their work to engage with social and political issues, Epp Buller says. I think Audra’s photography project follows in that tradition of trying to spark discussion and critical thinking about a complex issue.

The meanings we put behind gender labels are strong, Miller says. They come from many years of repetition and symbolism. As a society, we treat people differently depending on whether we see them as masculine or feminine.

It’s important to recognize that we link a lot of connotations to those terms—there’s a lot of power in the way we use them.

Hopefully, the show can portray some of that, and get people to think about the fact that we all have both masculine and feminine characteristics, and it’s not necessarily related to whether you are male or female.

I want viewers to draw their own conclusions, to make up their own minds, she says. I want this to be a conversation starter.