Better Harmony: Dad and Daughter Work Together on First Book

Dan Pohl and his daughter Jessie, Moundridge, decided to do something new together: publish a book. 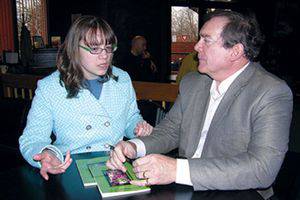 Jessie and Dan Pohl with copies of Autochthonous: Found in Place, poetry by Dan with illustrations by Jessie

Dan has taught at Hutchinson Community College for 31 years, and has been writing poetry for more than a decade. Jessie is a junior art major at Bethel.

At the beginning of this year, Dan saw his first book-length poetry manuscript come off the press as Autochthonous: Found in Place, with pen-and-India-ink drawing illustrations by Jessie.

I’ve been writing poetry for 12 years ago, off and on, here and there, Dan says. [More recently], I started writing seriously, as in constantly.

Although he had produced a couple of chapbooks, It took this long to gain enough courage to publish something [with a press]. The hardest thing for a writer is to put your stuff out there.

Two years ago, he approached Kevin Rabas, instructor of creative writing at Emporia State University, and Larry McGurn, who are both associated with Washburn University’s Woodley Press.

The Topeka-based press is devoted to exposing individuals everywhere to the work of talented Kansas writers.

Dan found out his manuscript had been accepted just after Jessie completed her freshman year at Bethel.

Jessie had started studying art and bringing home pictures, Dan remembers. We started framing Jessie’s art. Realizing he’d need an illustrator for his book, we began putting two and two together, he says. 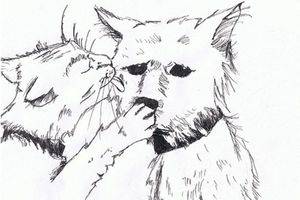 He just asked me if I wanted to do it, and I said yes, Jessie says. He’d choose a poem he wanted illustrated and describe it for me. I’d show him something or I’d give him different ideas and we’d talk about it. Then I’d try to incorporate that as much as possible.

This was Jessie’s first try at book illustration, and it required some different artistic discipline. We’d have to decide how they were going to set the art on the page: horizontal or vertical. We’d have to size the drawings to fit.

The art I do on my own is more surrealist, she continues. But I have a love for pen-and-ink work. And I’d like to be well-rounded [as an artist]. So I thought, this could be a good experience.

And it was. I did enjoy it. It tests your limits—you’re a surrealist and your dad says, ‘Draw a cat and a dog.’ It was different to try to do something ‘on order.’

I’d ask something like, Can you draw an Indian shaman raising his hands up to the sky? Dan says. Her image was even better than what I’d imagined.

It’s been fun to see Jessie’s excitement about this collaboration with her father, says Rachel Epp Buller ’96, assistant professor of art. As her professor, I’m also glad to see that she’s been able to push herself into new subject matter. Who knows what future doors this could open for her down the line?

[Dad and I] know how to talk to each other, to be patient with each other, Jessie says. To see these two things, writing and drawing, becoming something that wasn’t in the world [before]—that’s a wonderful process to watch.

I trust her to know that [the book is] going out to people who want to be entertained, to enjoy it, Dan says. It’s like families who sing—you just get a better harmony.

The book’s title, Autochthonous: Found in Place, comes from an item Dan ran across in a science magazine. It is a geological term that means … that a species or a singular rock formation is found only in that one particular spot on earth.

That’s exactly what this book’s about—the people and places of Kansas and the things we do here, Dan says.

He has enough poems for a second book, Unpaved Roads, which he and Jessie are already in the process of planning.

Autochthonous: Found in Place can be ordered from Woodley Press or amazon.com.